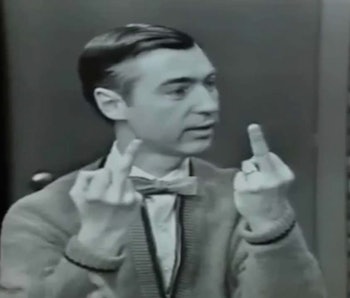 Take a look at Drake hating on Tyga, Queen Sweezus throwing shade at Katy Perry, or any single member of the cast of RuPaul’s Drag Race speaking. They’re all just having so much fun. Day in and day out, humans (fabulous or not) find great joy in getting our friends, non-friends, and lovers riled up. It turns out there’s a lot more to this simple pleasure than sadistic tendencies — there are a lot of complicated psychological forces at play.

According to Dr. Robert Ausch of New York University’s Department of Psychology, a lot of things motivate us to be offensive. For one thing, we love to get on people’s nerves because it’s a foolproof way of getting someone’s attention. “In personal relationships, what happens is that many of us grow up with parents that are busy or unavailable,” he said in a phone interview with Inverse. “We learn that there’s a sure-fire way to get their attention: It’s to push their buttons. Then they’ll respond to us.”

Being offensive is also our way of pushing boundaries. Whether it’s with friends, family, or significant others, it’s always incredibly satisfying when you can be a huge dick to someone and know they’ll still come back. Many people, especially those who grew up with less available parents, have anxiety about the people in their life leaving them. According to Ausch, the tendency to test people’s limits oftens stems from a need to know that those people will get over any offense caused. When you’re cracking jokes about your best friend’s mom and he doesn’t punch you in the face, that’s positive feedback. Even if he punches you and then hangs out with you again a few days later, that’s not bad. That’s acceptance.

This can happen on a playful scale — casual teasing in flirtation is another harmless example — but Ausch also points out that this sort of behavior can be characteristic of people with “borderline” personalities. Like a toddler or an emotionally undeveloped adult, these people crave attention of any kind and feel power in their ability to control the emotions of others. “Usually the people who do that a lot in relationships — in a testing way — don’t stop,” says Ausch. “They do that until they finally are offensive to the point where it does damage the relationship.”

But we don’t just love being offensive ourselves. We also love it when other people go there. Some [late night hosts]((https://www.youtube.com/watch?v=AZZJjPPdMSc) and comedians build their entire careers on being jerks for entertainment. We like them because they often say the things we can’t or won’t. By being offensive, they’re often making a bold statement, giving us something — and someone — to identify with. For example, it’s no secret how much Lil B hates Kevin Durant. What’s that? You do too? Lil B just created a “site of identification” for you, as Ausch (kind of) puts it. It’s not just you against Kevin Durant. It’s you and Lil B and all of Lil B’s fans against Kevin Durant.

That feeling of solidarity makes us feel good, too. Thanks Based God!

It may feel good to be mean or to love people who’ll be mean for you, but the underlying psychological reasons for that — being attention-hungry, having abandonment issues, or yearning to be part of a group — reveal some dark things about us. Still, it’s an amazing bit of alchemy that we can get such a kick out of a coping mechanism.