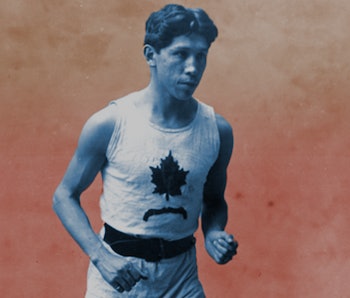 Monday’s Google Doodle features Tom Longboat, a Canadian long-distance runner who is regarded as one of the greatest marathoners ever. And although his promoters and the press often called Longboat “lazy” for alternating hard workouts with “active rest” periods, like long walks, physics explains long-distance running is an incredible feat no matter how you do it, and it’s hard to argue that a legend like Longboat didn’t know exactly what he was doing.

The Science of Long-Distance Running

Long distance running is mostly about endurance, according to The Conversation. The best runners have “excellent” cardiorespiratory fitness and great technique, and some distance runners train by doing 200 km of running per week. So much for being proud of getting a few thousand steps in on a health app every day!

Elite runners these days usually do quite a bit of low-intensity training, equaling over 10 hours of running each week. That’s basically what Longboat did, but he was called “lazy” for switching up harder workouts with rest periods during his time. But the guy clearly knew something the press, his promoters, and even his managers didn’t, because Longboat’s running times actually improved after he bought out his contract over that dispute, among other issues he had with his managers.

All About That Race

Elite distance runners use smaller quantities of oxygen and energy to maintain speed, The Conversation reported. And thanks to those features, as well as the low-intensity training that Longboat utilized in his own training, they can endure through races over long distances.

Long-distance runners also usually have a lower body mass index and reduced body fat, and science can help explain how a runner’s center-of-mass can impact their velocity in a race. But whatever Longboat had going for him when it came to body mass, velocity, and training technique, it obviously worked for him, because you don’t win the Boston Marathon without a good training regimen — and a little bit of science — on your side.

More like this
Science
Feb. 5, 2023
What Mysteries is the Universe Hiding from Us? A Cosmologist Weighs In
By M. Mitchell Waldrop and Knowable Magazine
Science
Jan. 29, 2023
Does the Doomsday Clock actually mean anything? Experts weigh in
By Jon Kelvey
Science
Feb. 1, 2023
Ancient Egyptian "Funeral Home" Reveals Secrets of Embalming
By Jennifer Walter
LEARN SOMETHING NEW EVERY DAY.
Related Tags
Share: