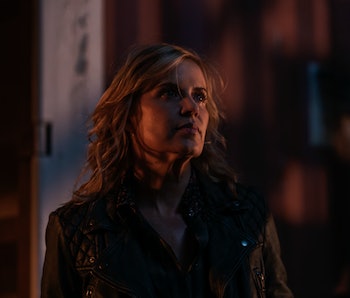 So that’s how the Diamond fell. In the latest episode of Fear the Walking Dead, AMC’s spin-off zombie series finally reveals exactly what happened to the Diamond that caused it to fall — and what was left behind.

Spoilers for Fear the Walking Dead ahead.

On Sunday’s episode of Fear the Walking Dead, titled “The Wrong Side of You Right Now” (say that fast), Madison’s attempt at a home for her family burns down when the Vultures come roaring in with trucks upon trucks of walkers because they’re mighty pissed Madison has their leader, big bad Mel (Kevin Zegers). But what the Vultures didn’t see was that Charlie (Alexa Nisenson) asked Madison and the Diamond — in particular Naomi (Jenna Elfman) — to take in Mel, who has come down with a nasty illness.

Against her better judgment, Madison agrees. And against her better judgment again, Madison tries to shoo Mel, even lending him a loaded truck to get him back safely. But Mel’s illness stops him halfway to the Vultures, compelling Alicia (Alycia Debnam-Carey) and the still-alive-in-this-flashback Nick (Frank Dillane) to take it upon themselves to bring Mel back. Fortunately, Alicia and Nick catch a Vulture convoy on their way, allowing them to warn the Diamond ahead of time.

But will it matter? As we quickly learn, it kind of doesn’t.

Fast forward to the present timeline, the Diamond has burned down. The Vultures had an (utterly confusing) plan to bring down the Diamond by unleashing a massive walker horde, with the added bonus of creating a WALL OF FIRE so all the zombies burn down the place as they crash through the gate. It’s kind of stupid and silly, but it works, because the Diamond is left in ruins just as it was starting to feel like a home.

In the current timeline following the big shootout, Alicia kills Mel after firing a grenade into his truck. As he crawls out half-crispy, Alicia kills Mel at his most vulnerable. This is Fear the Walking Dead screwing with its audience the most, creating a Fake Negan and building him up all season long, only for Alicia to dispose of him like a cockroach under her boot. I am genuinely unsure of what Fear is trying to do here, but I kind of like it.

Anyway, in the current timeline, John (Garret Dillahunt) is running out of time, and Naomi needs medical supplies that may still be left in the Diamond. It’s been abandoned since heaven knows how long it burned down. So Althea (Maggie Grace) rams through the still-standing gate of the Diamond, only to end up at the center of an ocean of burnt walkers still hungry for a feast.