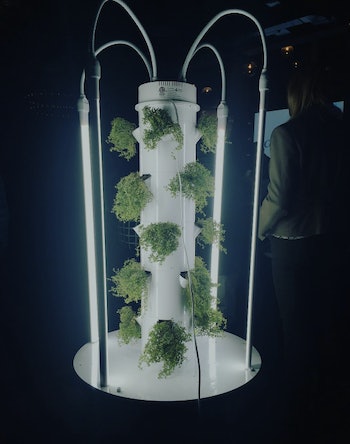 In a humid greenhouse on a rooftop in the Bronx, Electra Jarvis is showing off her oasis cubes. Tucked away from direct sunlight, a cabinet full of small, spongey squares are arranged neatly, each one the home to a sprouting seedling. In a few months, the seedlings will become lettuce, bok choy, and mustard greens. For now they are tiny stems, fed by an automated system of nutrient-rich water and regulated light.

“I don’t know if you’ve heard of biomimicry, but you want to replicate what nature is doing,” says Jarvis as she inspects the seedlings.

Biomimicry — and the astounding technology that facilitates it — is how Jarvis’ business, Green Food Solutions, intends to break open New York City’s urban gardening, in the process disrupting an agricultural system that she’s convinced is wasteful and bad for the planet.

Founded in 2017 while Jarvis was completing an entrepreneurship program at Kimbal Musk’s urban farming initiative Square Roots, the company has grown from a shipping container grow-op on Square Roots’ Brooklyn compound to the skyline greenhouse we’re standing in now.

While Jarvis tends to the oasis cubes and several rows of leafy greens, her company is actually growing a whole other product, one which does not require having a green thumb and could become a future fixture in homes across the planet.

This Instagram video shared this month by Green Food Solutions promotes the ease with which people construct its “Tower Garden Kit.” >>>

We’ve All Heard of Farm to Table, but What About Brownstone to Table?

In another corner of the greenhouse, Jarvis shows me a white contraption that looks entirely sci-fi. It’s called a tower garden; and it seems like it would be more at home on a spaceship than in a living room, although that’s exactly where it’s supposed to go. Sitting behind several rows of greenhouse-grown herbs and vegetables, the vertical gardens are the focal point of Green Foods’ business.

“It’s really tech innovative to the point where we can grow a plant three times faster than you would outdoors.”

Jarvis’ business partner Mary Wetherhill, who’s also with us on this greenhouse tour, makes the case for a future where tower gardens are as common as the kitchen sink. “That’s our dream for every single building in New York,” she says. “Whether it’s affordable housing, like you see around us, to luxury buildings.”

Tower gardens as common as a kitchen sink?

“That’s our dream for every single building in New York.”

Hydroponics — growing plants by placing the rotos directly in liquid nutrients instead of soil — are nothing new. The technology has been used by basement enthusiasts interested in growing tomatos — or other plants — for half a century. What has changed over the last 50 years is the world of food production, making the hydroponic approach look increasingly tasty. “The way in which we’re feeding the world just isn’t working anymore,” says Wetherill.

The agricultural sector consumes about 70 percent of the planet’s accessible freshwater, according to the WWF. In the U.S. alone, agriculture accounts for 80 percent of the nation’s water use. Between the effects of climate change and and and and and and and and the average American’s 80-100 gallon thirst for water, it’s a resource that becoming more precious with time. The UN predicts that as early as 2025, 1,800 million people will live in regions with absolute water scarcity, and two-thirds of the world’s population could be reaching “stress” water conditions (between 132,000 and 264,000 gallons per year, per person).

The way we farm will have to change significantly. “As the largest water user globally and a major source of water pollution, agriculture will play a key role in tackling the looming water crisis,” says a 2016 report from the Food and Agriculture Organization of the UN.

Tower gardens use 90 percent less water and 90 percent less land space than industrial crops, Jarvis and Wetherill tell me. The towers are technically aeroponic; plants hang vertically without soil, while a nutrient-rich water solution added at the base sends water to the top via a pump system. Water is subsequently recycled over and over, and plants manage to grow three to four times faster than traditional crops because of extra oxygen.

Jarvis puts her mission this way:

Wetherill has her own tower at home. It grows swiss chard, bok chop, arugula, lettuce, and basil. She says that with water flow and light completely automated, the tower gardens are essentially idiot proof. “The most laborious aspect of it is remembering to fill your reservoir. So that’s it. And it’s every two weeks,” she says.

The City That Always Eats

In a city like New York, there are spatial advantages to vertical gardens, too. The larger the city, the smaller the affordable space. A vertical farm poses an urban gardening solution to anyone lacking a backyard or a roof.

If you’ve got a roof, that works too. Green Foods Solutions has landed a contract with a new residential building in Brooklyn to host 79 towers on its roof. Jarvis and Wetherhill will be on hand to oversee the install and then assist with growing. “Almost like landscaping for your farm,” Jarvis says.

As I leave, Jarvis hands me a bag of produce to take home. Grown from her oasis cubes in the greenhouse, it’s the same kind of mixed greens that the tower gardens can grow, using similar tech. “This mix is a few weeks old,” she says, inspecting it.

I mention that from my perspective, the green leaves in the clear, ziplock bag look practically new. Jarvis explains that since it’s grown right here, the shelf life is substantially longer than the grocery store variety.

What’s more, the taste is actually more potent. “The thing is, on one level it’s logical,” she says. “You freshly harvest something, it’s going to taste fresher, right? Flavor is something that actually gets depleted in transportation of food as well.”

“When you get to the physiological level of what is flavor, where does it come from inside of the plant? You just have more of it when you have it fresher,” she says.

A tower garden system from Green Foods Solutions costs about $543 a year to run.