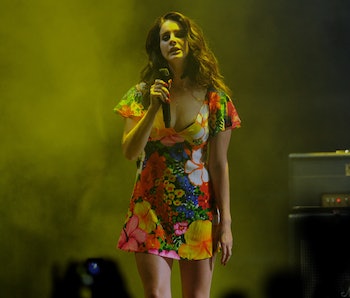 Lana Del Rey isn’t playing the games of the 2015 music industry. Still riding high on the tails of her beloved sophomore album, Ultraviolence, she announced back in January that her next album would be called Honeymoon. That was it. A few months later she announced a summer tour split with Grimes and Courtney Love, because of course. Then she announced the album would be out in September. Now, about two months from the planned release, the first sounds from the album with the title track “Honeymoon” are on YouTube. Who does a surprise album release in 2015, any more?

“Honeymoon” opens with “We both know it’s not fashionable to love me/ but you don’t go cause truly there’s nobody for you but me.” That’s the sound of sweet, sweet fatalism. The melancholy that Lana Del Rey always trades on, sounds perfected. With the light orchestration, its death march pace and the closing lyrics of “dreaming away your life,” Del Rey’s found her perfect sweet spot. The lyrics video opens with grainy valley shots of her sitting around with cutaways to a peculiar car on a highway. But with only a couple more months until the album’s official release, worry about that car later and just keep pressing repeat until all of the emotions drain out.

More like this
Entertainment
Jan. 27, 2023
Onyx the Fortuitous and the Talisman of Souls is a cringe comedy as overlong as its title
By Andy Crump
Science
20 hours ago
‘Golden Boy’ mummy CT scans reveal 2,300-year-old burial traditions
By Robin Bea
Entertainment
Jan. 18, 2023
Joker 2 leak reveals the movie’s surprising inspiration
By Dais Johnston
LEARN SOMETHING NEW EVERY DAY.
Share: