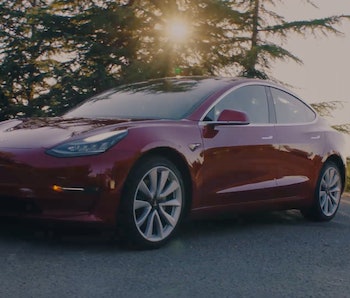 Tesla is pulling out all the stops for its next car. The Tesla Model 3 performance edition, announced last week with a retail price of $78,000, will come with an array of options that boost the stats of the company’s cheapest car. On Sunday, CEO Elon Musk revealed two new tidbits about the car.

In response to Tesla aficionado Ryan McCaffrey, Musk confirmed on Twitter that the car will come with sport-level brakes, coupled with red calipers. The confirmation lends weight to the rumor that Tesla was testing a performance edition at its Fremont factory test track back in October 2017, when “Tesla Model 3 Owners Club” uploaded a YouTube video of a version of the car with red calipers completing laps just three months after Musk alluded to the existence of the car. The new details also confirm that the “performance upgrade” won’t be a simple speed boost, with Tesla boosting the brakes to counteract the added power compared to the standard rear-wheel drive variant.

The performance version will give a serious increase to the standard Model 3, which entered production in July 2017 with the longer-range variant shipping first. While both cars achieve the same 310-mile range, the performance model offers a 155 mph top speed versus just 140 mph, as well as an acceleration time of 0-60 miles per hour in 3.5 seconds rather than 5.1 seconds. Musk has also promised the vehicle will offer better handling and 15 percent faster speeds than the BMW M3.

New brakes aren’t the only cosmetic changes coming to the car. It will be the first variant to offer a white interior alongside the standard black, as well as a carbon fiber spoiler and 20-inch performance wheels instead of the “Aero” wheels offered on the base models. Unlike the base $35,000 variants, the performance model also packs in all options, wheels and paint changes into the asking price, excluding Autopilot-related additions.

Tesla has started taking orders for both the performance edition and an all-wheel-drive optional extra for standard cars. The white interior will also roll out to standard vehicles within the next three to four months.

It’s not the only Model 3-related upgrade on the way: Musk has promised to unveil a new version of its supercharging stations by “late summer.”

More like this
Innovation
16 hours ago
A wild new plane-train hybrid could whoosh you to your destination — if it can get off the ground
By Molly Glick
Entertainment
8.5.2022 12:30 PM
For All Mankind Season 3’s space mogul is better than Elon Musk — here's why
By Ryan Britt
Innovation
8.5.2022 6:30 PM
This breakthrough stem-cell therapy could reverse genetic blindness
By Charles Q. Choi
Related Tags
Share: