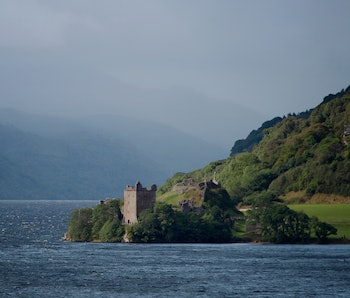 We all know that the Cretaceous-Paleogene extinction event killed all the dinosaurs, but scientists behind an ongoing project in Scotland are asking: What if it didn’t? In their tests on “environmental DNA” from Loch Ness, the United Kingdom’s largest body of freshwater and the alleged home to the Loch Ness monster, the team remains open to any sort of discovery, including any that point to the existence of ancient, giant reptiles.

The team, led by Neil Gemmell, Ph.D., a professor of evolutionary genetics at the University of Otago in New Zealand, aren’t sure what they will find. “I don’t believe in the idea of a monster, but I’m open to the idea that there are things yet to be discovered and not fully understood,” he told BBC News on Wednesday, “Maybe there’s a biological explanation for some of the stories.” One possibility is that Nessie is not a monster but some livic relic from an ancient time. We already know that the descendants of dinosaurs still live on today as birds, so who’s to say that a population of aquatic dinosaurs or dinosaur descendants — or maybe just one — couldn’t have survived in the 22-mile-long lake all these years? To find out, the team is looking to the waters of Loch Ness itself, hoping to find genetic data betraying the presence of the legendary beast.

The idea behind the study is elegantly simple: Animals leave behind traces of themselves wherever they go, so if Nessie (or a Nessie-like dinosaur) does exist, odds are high that it’s left some of its scales, urine, or feces in the lake. “This DNA can be captured, sequenced and then used to identify that creature by comparing the sequence obtained to large databases of known genetic sequences from hundreds of thousands of different organisms,” Gemmell told Reuters on Wednesday. Even if the eDNA doesn’t turn up a dinosaur, it’ll still tell the scientists a lot about the real creatures that actually live there.

“There’s absolutely no doubt that we will find new stuff, and that’s very exciting,” Gemmell tells *The Guardian. “While the prospect of looking for evidence of the Loch Ness monster is the hook to this project, there is an extraordinary amount of new knowledge that we will gain from the work about organisms that inhabit Loch Ness.”

As Inverse previously reported, people have suspected Loch Ness holds a monster for literally 1,500 years, yet nobody’s captured a decent photo of it or found any credible physical evidence to support its existence. Even though Loch Ness is big, scientists have long said that a breeding population of huge animals would require a much bigger habitat to survive.

Of course, when it comes to conspiracy theories, true believers will often dismiss any evidence that contradicts the hypothesis, even if the evidence is scientific. In fact, the history of conspiracy theories suggests that, even if this study turns up nothing, there’ll be people out there who think Gemmell’s team is intentionally hiding the truth from us all. Regardless of what they find, it seems unlikely that the Loch Ness myth will ever be laid to rest.