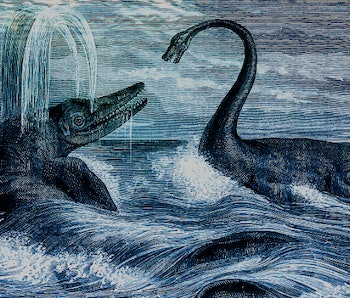 Between 250 and 90 million years ago, massive “fish lizards” hunted in warm oceans, fighting sharks and other marine reptiles like plesiosaurs for resources. The animals, called ichthyosaurs, are believed to have lived between the Early Triassic and Late Cretaceous periods all around the world — but most of the fossils have been found in Europe, adding a layer of mystery to just how widely spread these creatures really were.

However, a recently discovered ichthyosaur fossil is adding a piece to this Jurassic puzzle: In a paper published last week in PLOS One, a team of Indian and German scientists report that they discovered what’s believed to be the first ichthyosaur found in India. The team, led by Guntupalli Prasad, Ph.D., of the University of Delhi, believes this finding offers a glimpse into what the environment was like as the supercontinent Pangea broke into the ancient continents of Laurasia and Gondwanaland.

The location of the find suggests that a huge seaway once crossed through Gondwanaland.

The ichthyosaur skeleton was found near Lodai village in Kachchh, India. Analysis of the partially preserved skeleton, found in greenish-yellow shales, indicates that it was once between 16 and 18 feet long. The specimen is unique in its near completion: Excavation of the fossil site revealed the animal’s vertebral column, ribs, neural spines, gastralia, and two fins.

The scientists also found part of a jaw vertically embedded in the rocks near the other fossils, containing a few isolated teeth. From the wear patterns on the teeth, it appears that this ichthyosaur was a predator that liked to munch on marine mollusks, fish, and other marine reptiles.

By the placement of the fossils, the scientists infer that “the animal after death nose-dived into the soft sediment with the skull going down into the substrate in a vertical position.”

This fossil is also the first from the Jurassic era to be found in India and joins a growing number of Jurassic ichthyosaur fossils found in southern areas, like Madagascar and South America. This, the scientists write, “implies that a marine seaway possibly connected the western Tethys with South America via the Indian Ocean in the Late Jurassic, facilitating faunal exchange between Europe and Gondwanan continents.”

“Vertebrate fossils are rare from the Kachchh region, and we were expecting only bone fragments from this area,” Prasad told *PLOS Research News. “To find a near-complete skeleton is surprising as well as exciting.”