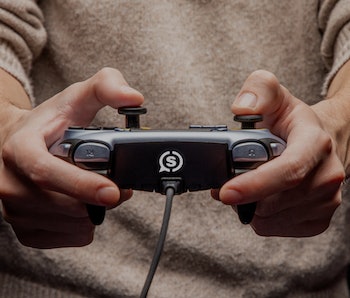 Any Fortnite player will tell you that in order to score that sweet “Victory Royale,” you need to find the perfect balance between building and gunslinging. This can be a little difficult when you’re fumbling around trying to choose the right tool. It isn’t an issue for PC gamers who can use any of the 101 keys on a standard keyboard to help them craft a fort of gargantuan proportions. But this can quickly get overwhelming for console players, who only have handheld controllers at their disposal.

This is precisely the issue that SCUF Gaming has set out to solve with its newly developed PlayStation 4 controller, the SCUF Vantage. This customizable controller not only gives players far more buttons to use than the standard DualShock comes with but also comes with four new features never-before-seen on similar devices.

“We want to move past the limitations of standard controllers,” SCUF CEO Duncan Ironmonger tells Inverse. “We’ve built on our previously successful designs to let professional Esports players and casual gamers alike use more of their hand real estate.”

A split-second decision can make or break a game of Fortnite. So SCUF has spent 18 months figuring out the how to make pulling off that game-winning combo on a console as simple as it is on PC.

On top of these additions, the Vantage will continue to make use of past features that made SCUF a household name in console Esports. The company has long dominated the industry and that comes down to the sheer number of patents they’ve filed in an already niche market. The company has 38 with another 65 pending. The most recognizable being the rear paddle system, which gives gamers four more buttons on the back of the controller.

The Vantage tries its best to put the infinite possibilities of a keyboard right into the palm of your hand. This comes at a bit of a price, as the controllers start $169.95 and will take some getting used to if you’ve been using the DualShock for years. But if you’re willing to learn your way around some new buttons, you can spend less time cycling through building options and more time dancing after you secure the Victory Royale.

More like this
Gaming
6.21.2022 7:36 PM
How to complete Nindo Challenges and earn the Manda Glider in Fortnite
By Joseph Yaden
Gaming
6.17.2022 4:00 PM
The agony and ecstasy of PlayStation trophy hunting: "It's a huge drop of serotonin”
By Joseph Yaden
Gaming
6.21.2022 4:27 PM
Everything you need to know about Crisis Core: Final Fantasy VII Reunion
By Hayes Madsen
Related Tags
Share: