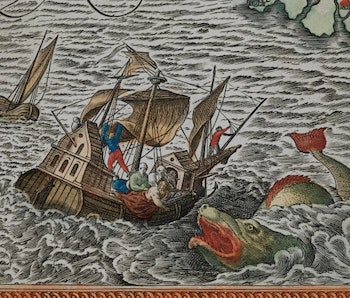 Celebrating the anniversary of the world’s first atlas, Google honored Belgian cartographer Abraham Ortelius with a Doodle on Sunday. His famed work, Theatrum Orbis Terrarum, or Theatre of the World, was published in 1570, establishing the standard for assembling an atlas. But there is one tradition that hasn’t lived on: his inclusion of sea monsters on nearly every map.

Theatrum Orbis Terrarum is unique for its collection of maps organized geographically, as well as its inclusion of academic citations, a practice that was not yet standard in 16th-century mapmaking. Ortelius was a pioneer of these practices and the first cartographer to present the idea of continental drift, but not all of his practices were innovative. In fact, he would be one of the last mapmakers to include illustrations of mythical beasts on his work.

“I would suggest that sea monsters on maps have two main roles,” said Chet Van Duzer in his 2013 book, Sea Monsters on Medieval and Renaissance Maps. “First, they may serve as graphic records of literature about sea monsters, indications of possible dangers to sailors — and data points in the geography of the marvelous.” In his book, Van Duzer points out that Ortelius and his generation seemed to share a fascination with sea monsters. Many cartographers of the era were monks who drew from encyclopedias, bestiaries, and biblical references.

The secondary role of the atlas sea monsters, Van Duzer describes, “may function as decorative elements which enliven the image of the world, suggesting in a general way that the sea can be dangerous, but more emphatically indicating and drawing attention to the vitality of the oceans and the variety of the creatures in the world, and to the cartographer’s artistic talents.” When maps were still hand-drawn, such illustrations would be more costly. Thus, these maps would often be displayed as a symbol of wealth.

Van Duzer suggests that this tradition may have first been influenced by Greco-Roman illustrations of mythological beasts. However, Ortelius was one of the final cartographers to embrace the tradition. His presentation of the first atlas helped guide maps to more scientific use, which led to fewer mythical decoration.

Theatrum Orbis Terrarum was published at a pivotal moment in history, where cartography first began to prioritize science and accuracy over aesthetics. Ortelius applied innovative theories and methodologies alongside illustrations of sea monsters, showing that he had his hand in both worlds. Theatrum Orbis Terrarum established new academic standards while continuing to highlight a fading tradition of the era, making it a key player in cartography’s evolution.