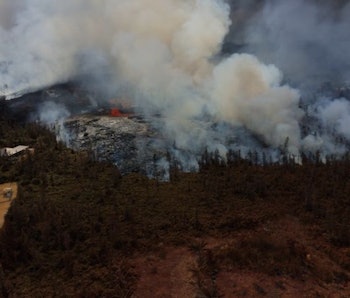 After two weeks of smaller, gassy tantrums, Hawaii’s Kilauea volcano finally had a big eruption on Thursday, shooting a plume of ash 30,000 feet into the air. The descending ash cloud, posing a serious health risk for nearby residents, prompted local officials to distribute N95 gas masks. These will help keep ash particles out of the nose and lungs, but they won’t protect against the eruption’s tinier, more dangerous components.

As NPR reported on Friday, Hawaii officials distributed 2,000 N95 masks but warned that they would not protect against gases and vapors. Earlier during Kilauea’s eruption, newly formed fissures released dangerous sulfur dioxide, a gas that reeks of rotten eggs and poses serious health risks to the respiratory system. Prolonged exposure to sulfur dioxide, as Inverse wrote previously, can cause choking and suffocation and, in the long term, asthma and pulmonary edema. The N95 gas masks being handed out are, as the Hawaii Emergency Management Agency states, not going to prevent these issues: “Masks do NOT protect against gases and vapors. They will only provide filtering for ash.”

The N95 mask’s ability to protect against ash inhalation, of course, is extremely important. Ash from volcanoes are essentially tiny (generally smaller than 2 millimeters) shards of volcanic rock and glass, so breathing them in is not only painful but dangerous. “It was a grit, like a sand at the beach,” Joe Laceby, a local resident, told The Associated Press. These particles can cause inflammation if they scratch the skin and the eyes, and if they’re inhaled they can cause respiratory problems. In large amounts, inhaled ash can cause suffocation and death, which, according to National Geographic, is the most common cause of death from a volcano.

A mask with an N95 designation, according to the United States Food and Drug Administration, can block at least 95 percent of particles under 0.3 microns in size if it’s used properly. That covers ash but not sulfur dioxide gas. To truly protect against sulfur dioxide gas, you’d need an chemical cartridge or gas mask respirator, which actively filters out gas particles from the air you’re breathing in. These are relatively expensive compared to the simple N95 masks, and they are much trickier to fit and use properly, so officials don’t recommend using them anyway.

The best thing for residents to do, according to Hawaii officials, is to get out of areas with increased sulfur dioxide, stay indoors as much as possible, and keep windows shut.

The intensity of the threat is dependent on the whims of the winds. Fortunately, as NPR reported, the winds affecting the ash plumes during the big eruption “were mostly directing it away from people.”

More like this
Science
5.14.2022 12:30 PM
Omicron subvariants: An epidemiologist answers 5 essential questions
By Louis Jacobson and Kaiser Health News
Science
5.16.2022 10:00 AM
Pig-human heart transplants still have a long way to go
By Andrew Fenton, The Conversation and Françoise Baylis
Mind and Body
5.3.2022 10:45 AM
More than half of Americans have had Covid-19 — here's how to tell if you are one of them
By Katie MacBride
Related Tags
Share: