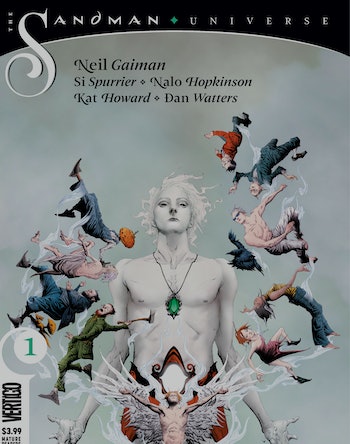 Twenty-two years after Neil Gaiman’s modern epic fantasy The Sandman ended, the Dreaming will awake once again. Beginning in September, DC and Vertigo will expand the scope of Gaiman’s eerie but beautiful universe in The Sandman Universe, a collection of four new ongoing comic books from writers hand-picked by Gaiman and set within the same continuity of the author’s iconic saga.

Between 1989 and 1996, Gaiman wrote The Sandman for Vertigo, the influential imprint from DC Comics that defined an era in mature graphic storytelling. Even with so many other immortal works that carry the Vertigo logo, like Brian K. Vaughan’s Y: The Last Man, Bill Willingham’s Fables, Warren Ellis’s Transmetropolitan, the Hellblazer series, and Alan Moore’s Watchmen and Swamp Thing, Gaiman’s Sandman remains synonymous with the publisher as well as its author, who captured a period in dark fantasy in one massive 75-issue run.

Following the publication of Gaiman’s final issue of Sandman in March 1996, many spin-offs, prequels, and other adjacent titles were released — a testament to the continuity if there ever was one. But 2018’s Sandman Universe is by far the biggest single effort to expand the universe. The four new comics bear the same names as previous Sandman spin-offs, but under the Sandman Universe banner, the books are all new with new stories and new talents at the wheel.

Prepare to enter the Dreaming once again. The following are the new comics in the Sandman Universe:

The Dreaming and House of Whispers will begin in September, while Lucifer and Books of Magic start in October. Check out the previews of each comic below, which demonstrate the bold, unique styles coming to this resurrected universe.

“I’ve always been a passionate fan of fantasy, and to be working with characters from the Sandman Universe is a dream come true,” Evely tells Inverse in an email. “It is the right place for me, and the right style for my lines and likes.”

“The world Neil Gaiman created presents an interesting, open environment and artistic freedom that artists don’t normally have,” Stanton says, “and as a storyteller, the nature of the series itself brings a challenge that I can have fun constructing and creating.”

“Lucifer caught my attention the first time I saw him in the Sandman books,” Max says. “The mystery around him — his elegance, narcissism and cruel personality — are things I’m always drawn to work on, I couldn’t be happier being part of this project.”

“We have the opportunity to expand our creativity and share with readers what Sandman means for all of us,” says Sebastian.

“I was asked by editor Molly Mahan if I would be interested in working on a new Books of Magic ongoing series, and I was in,” Fowler reveals. “The original BoM has always been my favorite Gaiman book and held a special place in my heart, introducing and hooking me to the magic of the Sandman Universe.”