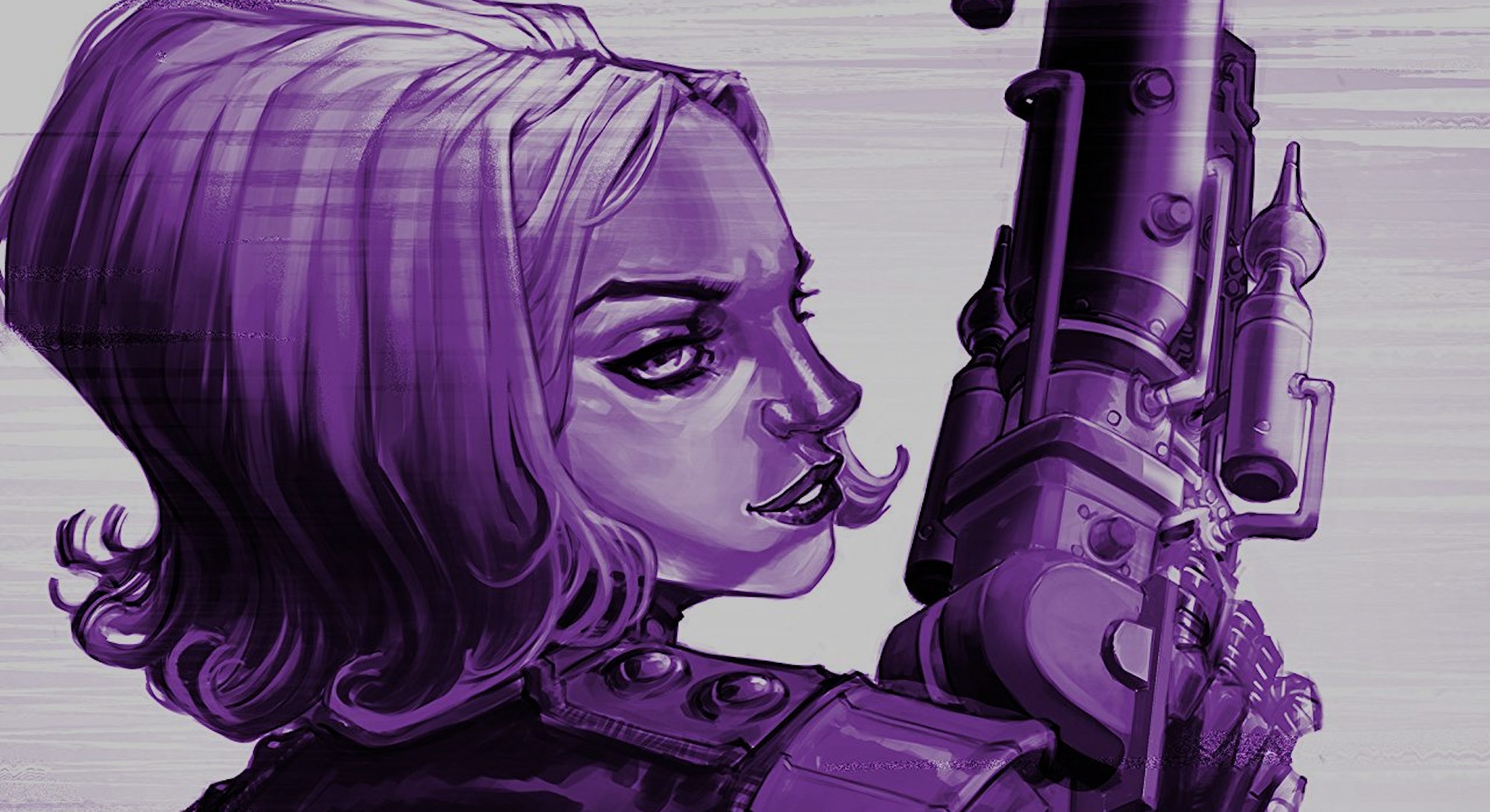 Imagine, for a moment, that the multiverse theory wasn’t just real, but it was normal to hop between realities. And imagine chasing down criminals across realities wasn’t just a job, but a stage for fame-hungry reality stars. Got it? Good. Now don’t think too hard about it. Just enjoy the ride that is DC’s new comic — via the adult-oriented imprint Vertigo — an emotionally dark and unexpectedly colorful series called Motherlands.

The brainchild of Judge Dredd writer Simon Spurrier an Doctor Who artist Rachael Stott, Motherlands is set in sci-fi worlds, but these spacescapes are only a backdrop to the drama between an estranged mother and daughter, as seen in the first issue which hit shelves last week.

In Motherlands, the Many Worlds theory is real, and it’s allowed the rise of “Huntertainers,” bounty hunters who travel the multiverse, tracking criminals for profit and fame.

Back in the day, the best Huntertainer was Selena, as ruthless as she was sexy, but she now lives alone, aged, and bitter over her own perceived irrelevance. Her daughter Tabitha is struggling to step out of her mother’s shadow, and takes up a lucrative job that compels Selena to come out of retirement for one last hunt.

A veteran writer of sci-fi comic books, Spurrier says he’s pretty much had it with all the tropes you can think of with time travel and alternate dimensions.

“I get angry about stories where the writers had this big High Concept brainwave and nothing else,” Spurrier tells Inverse. “The world is the story and the story is the world: bo-ring.”

Spurrier says other multiverse stories have become “unadventurous” and are “confining themselves” (“Oh look, Hitler won the war, how novel,” he mocks). With Motherlands, Spurrier wanted to go deeper. “Go back a few million years to find the creatures which evolved into us, then speculate about what else they might have become, and more importantly what insane cultures and technologies they might have developed along the way. Then you’re in far more exciting territory.”

Spurrier further posits, “Imagine all these alternates realities have made contact with each other and are now busy swapping ideas.”

With so much world-building in his sci-fi forest, Spurrier was just as careful not to get lost in the trees. When I ask if he considered including a prologue or a glossary page (such as the opening titles of Blade Runner or Pacific Rim) to lay out the oddities readers have to navigate, Spurrier replied, “God, no. If you have to stop to explain shit you’re doing it wrong.”

“For me the perfect setup, especially in sci-fi, is to be utterly casual about big ideas,” he adds. “I like to create worlds, make sure they feel functional, then bump them into the background so I can tell awesome stories in the light.”

Readers are expected to keep up with Spurrier’s “fucking relentless stream of sci-fi ideas,” but the most important thing to pay attention to is also the easiest: The resentment between Tabitha and Selena.

“Both women are incomplete,” he explains, “I became fascinated by these two characters and their relationship: an elderly narcissist who was once the center of attention but is now lonely and insecure, and her daughter, whose emotional neglect as a kid has left her as this cold, stoic woman.”

That’s not to say Motherlands doesn’t get weird. It does. Subverting stylistic hallmarks of gritty science-fiction, Motherlands is a universe of colors and shapes that take minutes to fully process. Not because it’s incomprehensible or confusing — the book is very clean in presentation — it’s just really freaking weird. For example, a rival bounty hunter, Oona, has a supermodel face with a formless body, like mountainous blobs of placenta.

“Yes, I Googled placenta for reference,” Sott admits to Inverse. “When I read the script her dialogue was like a sweary, old mercenary dude. If I get a really strong feeling of what something ‘should’ look like, I do a 180. So I made her look like a Kardashian. She’s got this huge, disgusting body with a sexy lady face plonked on top.”

Tabitha and Selena are also designed unlike most sci-fi heroines. “Si described Tab in detail, and one aspect was that she wouldn’t have a Victoria’s Secret model physique,” says Stott. “That interested me. As an artist who grew up drawing superhero pin-ups, you get used to drawing one type of woman.” As for Selena, “we rarely see old women in comics aside from Aunt May. I think there’s a real problem in media, with old bodies, fat bodies, differently abled ones, all portrayed as objects of horror or comedy, especially in comics.”

“If you have to stop to explain shit you’re doing it wrong.”

Motherlands also has underlying themes of “fame, fate, culture, globalization, and social trends” in spades. Spurrier overserves that the cult of celebrity has been “democratized” in the age of careless social media stars. “Not long ago ‘celebrity’ was something that happened to people by being exceptional in one very narrowly-defined way,” he says. Now, for better or worse, “attention has become democratized and homogenized.”

If Selena’s time as a Huntertainer was the Golden Age of Hollywood, or MTV, then Tabitha’s is the Age of YouTube. “In Motherlands people look back when the network of interrelated realities was new. Exciting ideas traded between Earths, and people like Selena celebrated for her style, class and skill as a hunter. Cut to the present day in our tale, it’s a big crazy mess, unthinkably vast and populous, in which nobody feels very special any more.”

There’s a lot going on in Motherlands, and not all of it will be explained. Unlike the majority of science-fiction stories that inspire numbing amounts of Wiki pages, explainers, and Easter eggs, Spurrier and Stott promise to throw the whole kitchen sink without the IKEA manual.

“Sooner or later people just relax, stop worrying about ‘How does that work? Why’s that thing flying?’ and ‘Why does that guy have a thousand phalluses on his skin?’ and focus on what’s important: two women trying to build a solid relationship in a crazy universe.”

Motherlands #1 is available now. Issue #2 will be available on February 28.