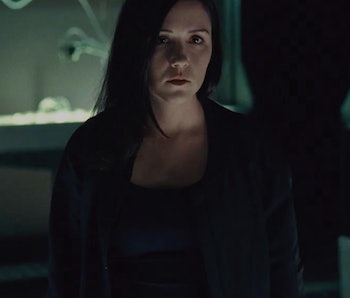 When Bernard stumbled into that cave in the fourth episode of Westworld’s second season, he confirmed a long-suspected fan theory: Elsie Hughes, the programmer who disappeared after Bernard strangled her in Season 1, was still alive. But, Shannon Woodward, who plays Elsie, doesn’t think it was much of a mystery.

“I actually was surprised that people thought I was dead,” she tells Inverse. “That surprised me.”

Woodward has known about Elsie’s survival since Season 1, and says she never interpreted the open-ended scene as Elsie’s death. Still, keeping the secret during the offseason was hard.

“People come up to me all the time and are like ‘are you dead?’” she says. “And it just gets really meta. I’m like, ‘wait, am I dead? Like as a human person, is Shannon dead? Why do people keep asking me this?’”

Now that Elsie is back though, she’s had to catch up with just how much has happened since she went missing. The Hosts are self-aware, Ford is dead, the park is overrun, and Bernard is a Host. She adapts quickly because, well, she has to.

“I don’t think she has time to do anything but accept it,” Woodward says of Elsie’s quick partnership with Bernard. “I just think that struggling with that emotionally is a luxury that she doesn’t have.”

For viewers, Elsie’s return is welcome, because the programmer always felt like the most normal character in Season 1. While Ford was spouting grave proclamations and formulating his secretive plan, and the Hosts were becoming sentient, Elsie was just a smart person trying to do her job. Elsie is the closest thing Westworld has to an audience surrogate.

“I think most of the viewers of this show are human, and they deserve some representation, and I like to think that I represent the human race on this show,” Woodward jokes.

Woodward says there aren’t really clear-cut good guys or bad guys on Westworld, though she thinks Elsie is a “good-hearted person.” Back in Season 1, she was showing empathy for the hosts, going so far as to pull a fast one in order to save Maeve from retirement. However, Woodward’s not so sure Dolores and other “woke” hosts would be fans. From a certain point of view, she’s trying to prevent the development of self-aware A.I.

“Rosso Basilisk probably wouldn’t look back on her too kindly,” she says, referencing the same concept that sparked Elon Musk and Grimes’s relationship. “You know that theory that A.I. can come back from the future and punish all the people that didn’t usher it into existence and tried to stifle it? To them, that might make her a villain.”

If Dolores or Maeve learn how to time-travel, Westworld will have really gone off the rails. Maybe that’s Season 3.