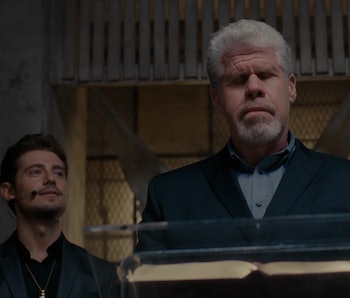 Amazon Studios is still attempting to out-Netflix Netflix, and the next series looks like a bloody, dark, mysterious winner. Hand of God, which debuted as part of Amazon’s user-driven pilot scheme, could be your next favorite show.

The first episode is already available to Prime subscribers, who have been treated to something unrelentingly dark and uncompromisingly religious (think: Constantine with a halo).

This dogmatic riff stars Ron Perlman, Sons of Anarchy’s boorish Clay Morrow, as a morally-pliable town judge who undergoes a transformation after an incident leaves his son comatose. He starts hearing voices, well, a voice. And it belongs to God. That in and of itself is an intriguing enough concept, but things apparently take another turn.

When the show’s creator Ben Watkins spoke at Comic-Con, he hinted at what lies in store for the rest of the series. “Obviously there’s the church and a preacher in the show,” he said. “I wanted to explore how we deal with zealotry in a current-day character who is singularly obsessed with something. How does that change you? What power does that bring you?”

Supernatural power by the looks of things.

Or could he be suffering from a mental breakdown? The specifics of what causes Pernell’s visions aren’t entirely clear - and that’s the hook. Watching his descent into vigilantism, roping in others to exact what he describes as God’s orders, is like witnessing Clay Morrow rise from the grave with a gavel in his hand instead of a gun. Perlman himself has even dubbed the show “a dangerous idea,” and it’s easy to see how it might ruffle feathers. If the show steers clear of a “crime-of-the-week comeuppance” formula and pushes its riskier elements, this could be the next binge-watching hit.

If not? It’ll be worth it just to see Hellboy back in action.