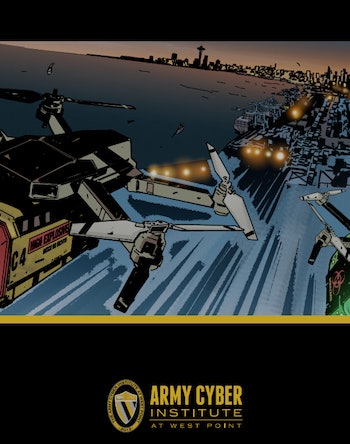 In “Engineering a Traitor,” the year is 2027, and a former military officer named Jay Roberts has just engineered a missile attack in downtown Houston — except he doesn’t know that it’s his fault.

This sombre graphic novel tells the story of Roberts, an army engineer working in Texas who’s been targeted by a militia eager to gain access to building codes in order to orchestrate a terrorist attack. With sophisticated A.I., the militia manipulate everything in Roberts’ life. The news he sees is curated to instill hopelessness and despair, and family members’ social media accounts are hijacked to distance Roberts from loved ones. Frustrated and alone, he eventually confesses security information to a “friend” he’s made online, allowing the militias the access they’ve been hoping for. Once they have what they want, Roberts’ social media is manipulated to make him look like a radicalized terrorist. When the attack occurs, he takes the fall.

The narrative may be science fiction, but it paints a realistic — if not paranoid — vision of the future. That bleakness is exactly what Brian David Johnson wanted when he began penning a series of graphic novels for the Army Cyber Institute at West Point.

“It’s really not there to scare people and disempower them,” Johnson reassures Inverse. “The idea is to say, ‘Ok, here are some things that could happen. Now, let’s talk about what we can do about it.’”

Johnson has worked as a futurist for over 25 years. He runs a thinktank called the Threatcasting Lab at Arizona State University, which works with governments, industry, and academia to predict the future threats that will affect everything from nationhood to food security. Johnson was enlisted, so to speak, by the the Army Cyber Institute — the cyber defence wing of West Point — to create new teaching tools that would explore the kinds of conflicts we could see a decade from now. The result has been four graphic novellas, a somewhat unusual approach to telling serious stories about the future.

Natalie Vanatta, a cyber research scientist and assistant professor at the Army Cyber Institute, tells Inverse that the graphic novels were conceived as a new way to provoke conversations about future threats.

“Our foray into the world of science fiction prototypes — graphic novels — is starting as an experiment,” she says. “Now, with the reality of these novels in hand, I plan to socialize them with course instructors at West Point this summer to see if they would be beneficial to their fall lessons plans.”

All four novellas cover dark and dystopic fare; surveillance, hacking, and a growing arms race between nations eager to develop the most sophisticated cyber weapons. Set in 2027, it’s science fiction that’s interested in predicting a not-so-distant future, which is kind of the point

“We want people to see these possible futures and start having conversations around how we disrupt, mitigate or possibly even recover from these possible threats,” Johnson explains.

Not Your Average Comic Book

To some, it could seem that covering serious themes in a comic book medium could make the future feel like fantasy. Johnson is quick to dismiss this idea, saying that a text-based prologue and epilogue in each novella sets up an educational tone, and the graphic novel structure makes the learning part accessible.

“There’s always a way of putting it in context,” he says. “And using them to make sure that people understand the intent. We’ve always lead with that intent, to say, ‘We’re here to have this broader conversation about things that might be out there.’”

Vanatta agrees that the graphic novellas have proven to be an effective portal into seeing what the future might hold.

“To clearly show that the threats in 2028 — from the evolution of the digital domain and how we use it — will not only affect larger society but will also have an impact on military operations,” she says.

If you’re worried about some imminent Terminator-esque dystopia portended by Johnson’s stories, he’d be quick to tell you not to get carried away. “We still have power, and I mean that very broadly,” he says. “I’ve been a futurist for over 25 years and one of the things that I know is that the future is built by people. It doesn’t just happen.”

In “Silent Ruin,” an armed conflict is brewing as a newly united Romania and Moldova causes Russian aggression. The move forces NATO to Russia’s doorstep, and a failed drone-based line of defence forces an American tank to the front line. However, Russia’s advanced cyber capabilities hack the tank, leaving it incapacitated — in the middle of the battlefield. In the next frame, Russian forces are seen rushing the doors of the American embassy.

The story ends on a cliffhanger, which seems only too fitting. It’s that “what if” factor that makes Johnson’s novellas so compelling. They urge readers to talk about the future now, to consider how technology will increasingly dominate in world conflicts. The more we understand now — and maybe the more it freaks us out — the better we’ll be at finding ways to mitigate cyber warfare. Plus, as far as Johnson’s concerned, the future is subject to a few rewrites.

You can read all of the Army Cyber Institute’s graphic novellas here, via the Threatcasting Lab.