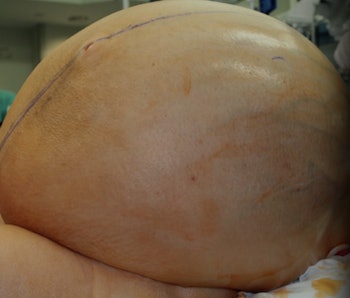 Doctors at Danbury Hospital in Connecticut removed a tumor as big as an entire adult human from the abdomen of a 38-year-old woman. Yeah, you read that right. About three months ago, after gaining 10 pounds a week for two months, the patient arrived at the hospital with a massively distended abdomen. Doctors discovered that she had a 132-pound tumor growing on one of her ovaries. Her doctors report that the patient, whose identity remains anonymous to protect her privacy, is recovering nicely. They waited to announce the case, though, since the gargantuan tumor disrupted the woman’s blood circulation and abdominal health so much that they wanted to make sure she would recover before they publicized the surgery.

“I might expect to see a 25-pound ovarian tumor, but a 132-pound tumor is very rare,” Dr. Vaagn Andikyan, the gynecologic oncologist who led the team of 25 that removed the tumor, said in a statement. “When I met the patient, she was extremely malnourished because the tumor was sitting on her digestive tract, and she used a wheelchair because of the tumor’s weight.”

Doctors established that the patient had a mucinous tumor, which grew in the ovary’s epithelial cells and was filled with a mucus-like substance (hence its name). Mucinous tumors often grow quite large quite quickly, and this one, while huge, wasn’t even the biggest ever recorded. In 1994, doctors reported removing one that weighed over 300 pounds!

While mucinous tumors are sometimes cancerous, they’re more often benign. This particular tumor, which turned out to be benign — non-cancerous — still posed significant health risks to the patient because of its sheer size.

“There were a lot of issues related to this very large tumor in the abdomen,” Dr. Linus Chuang, chairman of obstetrics and gynecology at Western Connecticut Health Network and one of the doctors involved with the surgery, told CNN. “She can’t eat, she can’t walk, and there are problems related to potential complications with this large mass compressing the venous system. She was at very high risk of developing blood clots because of compression of the blood flow.”

Anesthesiologists and cardiologists assisted with the surgery because as soon as the tumor was removed, the patient’s blood pressure dropped dramatically. Additionally, surgeons had to remove six pounds of abdominal wall tissue and skin that had been stretched by the tumor. Plastic surgeons assisted in reconstructing the patient’s abdomen.

“The good part about this story is, we were able to save her reproductive organs,” Andikyan told CNN. “As of right now, she’s not interested in having more children, but she wanted to have the opportunity, and we were very careful to avoid damage to underlying reproductive organs.”