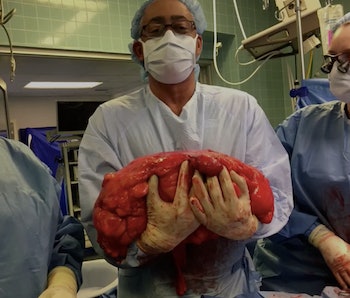 Kevin Daly had no idea why he had a beer belly. “I don’t even like beer,” he told the New York Daily News. “I was lean. I’m 6’3” and very athletic.” The 63-year-old New Jersey resident didn’t have a beer belly, though. The truth that surgeons revealed was something much stranger: a 30-pound tumor.

Daly’s concerns first arose after he had heart surgery in 2015. He told the New York Daily News that he lost over 30 pounds following the surgery, but that his belly remained quite large. “I thought they literally left stuffing and tools in me from surgery,” he said. After insisting that his doctors at Lenox Hill Hospital in Manhattan perform a CT scan, Daly got a clearer answer: He had a 12-pound liposarcoma, an abdominal tumor that forms among fat cells. He was vindicated, but when his doctors operated in December 2017, a bigger surprise was yet to come.

When surgeons got Daly on the operating table, they found that the tumor was more than twice as large as they’d initially estimated. “It was the largest tumor I’ve removed. It was a very challenging operation,” Daly’s surgeon, Dr. Julio Teixeira, said in a statement. “Because of the tumor size, there were organs out of position. It’s one thing to see the picture. It’s another thing to actually have it in your hands.”

While Daly’s tumor was indeed massive, it’s remarkably common for people with liposarcomas to assume their tumors are just fat. These tumors are pretty rare, though, affecting just about 2,000 people per year in the United States, according to Memorial Sloan Kettering Cancer Center. Unlike other tumors that interfere with bodily functions, oftentimes the only symptom of a liposarcoma is weight gain, making it difficult to diagnose.

Since the surgery, postoperative scans show that Daly’s organs have settled back into place, and his doctors say he’s recovering nicely. As is the case with other types of cancer, Daly will need to be monitored regularly to make sure that the tumor doesn’t grow back.

Daly’s story reminds us that our bodies can often be more complicated than they seem. But liposarcomas are very rare, so in most cases, if you think you have one, you may have just gained weight.