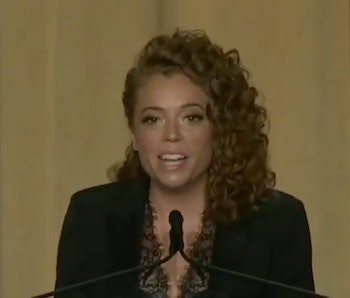 Trump withdrew the United States from the Paris Agreement on June 1, 2017, arguing that such strict environmental regulations would hurt the U.S. economy. The decision garnered harsh criticism from the 195 countries who signed the accord, as well as American policymakers and climate experts. But after a year that included multiple natural disasters in the United States, from record-setting hurricanes, to floods and wildfires, there is a public interest in returning to the standards and goals of the Paris Agreement.

Realizing that the accord is still on everyone’s mind, Wolf offered her own take on Trump’s decision. It may not have been the decision the audience at the Correspondents’ Dinner wanted, but she credited Trump for doing what he said he was going to do, at least.

“I think we should give the president credit when he deserves it,” Wolf said. “Like he pulled out of the Paris agreement, and I think he should get credit for that because he said he was going to pull out, and then he did. And that’s a refreshing quality in a man.

If what she’s hinting at is lost on anyone, there’s more. “Most men are like, ‘I forgot. I’ll get you next time.’ Oh, there’s going to be a next time? People say romance is dead.”

Wolf’s roast at the dinner is receiving an outpouring of both praise and vitriol on the internet, especially by those who found her jokes too “scandalous” for the event. However, it’s clear she knew which environmental topics were the most important her audience. After saying goodnight, she leaned into the mic and said, “Flint still doesn’t have clean water.”