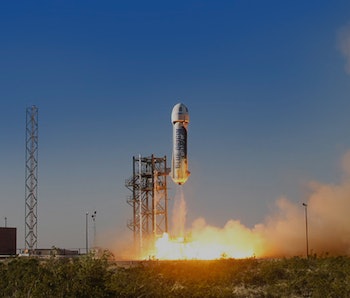 Amazon CEO Jeff Bezos tweeted Friday that his aerospace company will conduct its eighth test flight on Sunday, its first for 2018. Although no crew will be on the flight, there will be interesting cargo on board to learn more about the effects of microgravity and whether Wi-Fi can be sent to space.

A livestream of the New Shepard launch will be available on the Blue Origin website at approximately 15 minutes prior. At 9:45 a.m.(Update: Due to weather, the launch has been pushed back to 11:43 a.m. Central), the spacecraft will launch to the edge of space where the capsule will separate from the rocket as both return safely to Earth. Onboard the craft will be multiple Blue Origin Payload Lockers. Inside the lockers are sensors and experiments, which will collect data only possible at that altitude.

NASA will have a Suborbital Flight Experiment Monitor-2 on the flight to record environmental data in the cabin such as pressure, acceleration, acoustics, and carbon dioxide levels. This info will be used for future Orion capsule flights. The agency will also have a Schmitt Space Communicator on board to test the concept of providing commercial Wi-Fi access to users in space. The University of Bayreuth will have an experiment on board to see the effects of microgravity on daphnia water fleas. Data from this experiment could help design future bio-regenerative life support systems funded by DLR, the German space agency.

The New Shepard system is Blue Origin’s project for space tourism. A 60-foot rocket will carry a capsule large enough for six people to 100 kilometers above Earth, known as the Karman line. From there, the rocket and capsule will separate. The passengers will make their way back to the ground via a parachute as they experience weightlessness. Passengers can take in the view from the edge of space while the rocket makes touchdown to be used again in the future.

Blue Origin’s test launch of the New Shepard system will start at 8:45 a.m. from the Blue Origin launch site in West Texas, and the livestream will start on the company’s website 15 minutes prior.

While Bezos is on his eighth launch, he still has a ways to go to catch up to Elon Musk, whose company SpaceX will launch more than that number of flights in 2018 alone.