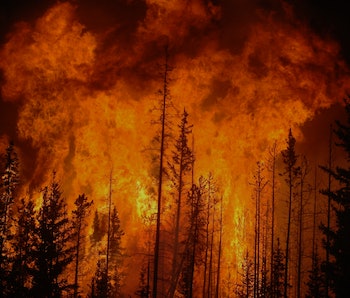 The once-lush forests of Western Canada are going up in smoke. Thousands of firefighters are struggling to control the unprecedented number of wildfires sweeping the country and neighboring Alaska. Thousands of people have been evacuated from their homes, and the smoke is sweeping across the West Coast and as far south as Colorado, causing air pollution ratings to skyrocket. While officials are bringing in the Canadian Forces to keep the fires contained, people are demanding to know why this year has gotten so out of control.

As of today, there are an estimated 106 wildfires in British Columbia, the largest covering up to 38,000 hectares — roughly the size of Denver. In Saskatchewan, there have been 592 wildfires so far this season compared to 213 in 2014, and they’re spreading even further west to Alberta. The combination of record-breaking warm temperatures, likely to have been brought on by the Pacific Decadal Oscillation and El Nino weather patterns, and the devastating effect of the mountain pine beetle have joined forces with the effects of climate change to create the perfect conditions for a wildfire epidemic, at least according to John Innes, the Dean of the University of British Columbia’s Faculty of Forestry, who spoke with the CBC.

It isn’t news that the West Coast, both in Canada and the States, has been heating up. Data from the U.S. National Centers for Environmental Information show that temperatures all along the West Coast are the warmest they’ve been in more than 100 years. The heat has bolstered the mountain pine beetle, which has been devouring pine in British Columbia and Alberta since the 1990s, to expand its range north and east into the boreal forest. These bugs are native to the country, but their populations are usually kept in check by the onset of cold weather. Increasingly mild winters and the subsequent expansion of beetle habitat has caused them to flourish, leaving millions of hectares of dead, dry pine trees in their wake. One lightning strike is all it takes to send it up in flames.

As the wildfires spread to Alaska, there’s growing concern that the heat will start to burn through the permafrost. Usually, this frozen layer is insulated by “duff,” a thick layer of twigs, moss, and other organic material. But when the duff burns, the permafrost — one of the Earth’s biggest carbon repositories — sends its stored greenhouse gases up into the air. And that easily, the effects of climate change could snowball.

Like many climate change scientists, Innes isn’t afraid to get real. “Longer term, we will see more fires. We will see the fire season extending,” he told the CBC. “It will start earlier, it will go on later, and the fires that we get will be more intense.” The future will be hot, and you will be able to taste it at the back of your throat hundreds of miles away, when the wind shifts.