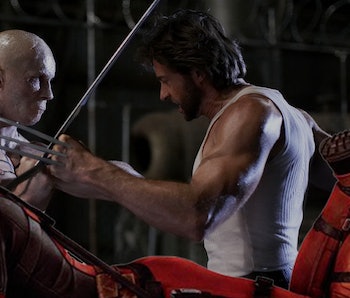 Ryan Reynolds made his debut as the beloved mercenary Deadpool in X-Men Origins: Wolverine opposite Hugh Jackman, a film people decidedly did not love. Luckily, both characters and actors have gone on to make much better great films separately, and now they have reunited for a new type crossover. Sort of.

On Friday, Hugh Jackman posted a video on his Instagram and Reynolds shows up in full-on Deadpool gear ahead of Deadpool 2’s release. The bit was Jackman trying to record a birthday message, but was interrupted by his old friend who was comfortably lounging in a nearby bed in his costume. The caption includes Jackman poking fun at his friend by calling Reynolds “the least greatest showman,” a nod to the Wolverine actor’s recent film.

As unorthodox promotion goes, this is on par with what Deadpool press has looked like since Reynolds’ return in the 2016 smash hit. Hilarious posters and nods to beloved figures – like Betty White – are among the tactics used to promote this series of comic book adaptations. With Deadpool 2 set to hit theaters on May 17, it makes sense to bring in the big guns. And, Jackman is definitely that.

Jackman’s Wolverine, on the other hand, does not seem to be returning after the successful Logan. After playing one of the most famous X-Men for nearly two decades the actor retired the role. So this nice video may be the best fans are going to get. Then again, crazier things have happened.

Deadpool 2 is less than a month away, so the answer to whether the fun tactics will pay off again is going to be answered. The first Deadpool was a surprise hit, so the sequel has real steam going into its premiere. Luckily for the studio, and fans, viewers loved the film during the test screening.

While some may be clamoring for an actual crossover, the lingering question is: Did Jackman actually have a birthday message to send, and did that person get one? Perhaps we’ll never know. Thanks, Deadpool.