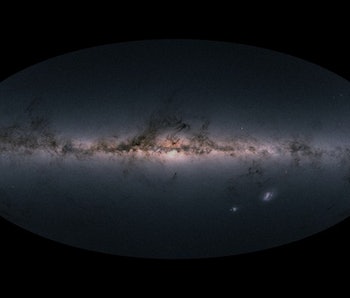 Astrophysicists from all over the world (but mostly, the New York metropolitan area) have gathered at the Center for Computational Astrophysics in Manhattan to sift through an unprecedented amount of information collected by Gaia, the European Space Agency’s space observatory. The data dropped at 6 a.m. Eastern on Wednesday, and scientists have hit the ground running, [digging through information on almost 2 billion stars.

According to the ESA, Gaia provides “sky positions and brightnesses for nearly 1.7 billion stars, distances, motions and color information for 1.3 billion, and a number of additional parameters for smaller subsets of stars and other celestial objects.” Launched in December 2013, Gaia is an orbiting observatory circling the sun, looking for interesting objects across the Milky Way.

All the information about the star map Gaia has been making is now available via the ESA Gaia Archive, which scientists will use extensively in the hack-a-thon room over the next few days.

For some, the experience of mining this star map for all its secrets of the Milky Way is both awesome and infuriating.

“I’ve just discovered I was off on one object, so this is more of a sad moment,” Jackie Faherty, an astrophysicist at American Museum of Natural History, tells Inverse amid a bustling room full of scientists at the hackathon. “I did three years of commuting to South America to obtain the parallax that Gaia just told me I was wrong on, so I feel a little humbled.”

The object Faherty’s referring to lies at the coordinates 0608, -2751. She thought it was a planetary mass member of the Beta Pictoris moving group, which is basically a pack of young stars that travel and move in the same way together. This one just happens to be a young pack of stars relatively close to Earth. The problem was that Faherty’s object was about 10 parsecs farther away from the group than she previously thought. For context, 1 parsec equals roughly 3.3 light-years.

“That was a lot of my life…lot of frequent flyer miles,” she says. “But I’m sure I’m right in other cases!”

Not all hope is lost for anyone digging through this data. Seated next to Faherty is Jonathan Gagné, a Sagan postdoctoral researcher at the Department of Terrestrial Magnetism of the Carnegie Institution of Washington. He’s made a prediction Gaia has just now validated — he’s located a planetary mass object that lives at the boundary between brown dwarfs and planets.

“I’m looking for new stars and new brown dwarfs and we seem to have a handful of new M-Dwarf stars seem to be exciting,” Gagné tells Inverse. “You have to look at their velocity, because they all move together in the same direction but they’re sparse physically.”

It’s important to look for M dwarfs, Gagné says, because they are the most abundant stars in any population.

“So it’s really interesting to see how many of each star’s mass you find in different group — tells you a lot about the different formation processes.”

After a few minutes of relative quiet in the room, Faherty yells “BOOM!” Apparently, she’s got a hit.

“This is a brown dwarf,” she says, pointing to a catalogue page on her laptop. “It’s a very low-mass object that is co-moving, which means it’s dancing with another star. They’re widely separated…all I needed to do was put in its coordinates and bam, they have the exact same distance and motion, so they’re co-moving.” So despite some initial frustrations, Faherty says she can now update a paper she’s been working on for a year and a half about this exact subject.

While the hackathon will only last a few more days, astrophysicists around the world will continue to this data to compare it with their own findings — and come up with new ones.

Science is a mess. It’s an emotional rollercoaster. But at least, in this case, Gaia is coming through with some incredibly useful information.

“It’s like, done and done,” Faherty says. “Why did we do science until this moment?”