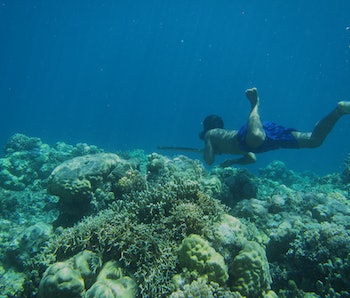 The Bajau people of Southeast Asia live in houses teetering on stilts above the turquoise waters of the Pacific. These ‘sea nomads’ blur the distinction between species of the land and sea, holding their breath underwater long enough to dive to depths greater than 230 feet, using only a wooden mask. This superhuman ability, which allows them to spend up to 60 percent of their day diving, comes down to the evolution of one very important organ, write researchers in a new Cell study.

The Bajau have lived in relative isolation for over a thousand years. The population has adapted to its unique environment and lifestyle in many ways over the generations, but most notably, as the new paper suggests, natural selection has led many members of the population to carry a gene for big spleens. This organ, fist-shaped and purple, usually sits to the left of the stomach and is necessary for holding oxygenated red blood cells — which are necessary when you’re holding your breath. In most people, the spleen is about four inches long. But spleens of the Bajau (pronounced “be joe”) are about 50 percent larger than those of non-diving people in the same region.

The Bajau’s enlarged spleens are evidence that natural selection is still driving human evolution in small ways. Their increased size, write the team of researchers, led by University of California Berkeley biologist Rasmus Nielsen, Ph.D., comes down to a genetic mutation that has been naturally selected for within their population over the generations. It’s thought that this gene variant increases the size of the spleen by increasing levels of thyroid hormone in the body, which has been linked to larger spleen size in mice.

The finding came as a surprise to Nielsen and his team, which included first author Melissa Ilardo, a doctoral candidate at the University of Copenhagen. “The chance of finding evidence of population-specific natural selection, even in a population as extreme as the Bajau, was pretty slim,” said Ilardo in a statement published Wednesday.

Visiting Bajau communities in Indonesia with a portable ultrasound machine, Ilardo collected data on spleen size in 59 Bajau people and 34 people from a neighboring village who were ethnically Saluan and did not dive. Comparing that data with each individual’s genome sequence, analyzed from spit samples, the team found that the Bajau’s larger spleens were linked to the prevalence of the thyroid hormone-boosting gene known as PDE10A. The Saluans, with their normal-sized spleens, didn’t carry that gene variant.

With their larger spleens, the Bajau can hold about 10 percent more oxygenated blood cells during a dive than non-divers, Nielsen estimates. The spleen is an extremely important part of the human dive response, a reflex that occurs when we’re plunged into water and are forced to hold our breath: Our blood vessels tighten up and our heart rate slows in an attempt to conserve oxygen, and the spleen, like a battery, starts releasing its stores of oxygen-rich blood cells to keep us going. Like Energizer bunnies, the Bajau keep going and going, which makes them a truly remarkable example of human adaptation.

“I think it’s fascinating to see just how extraordinary this population is, to think that they’re almost like superhumans living among us with these really extraordinary capabilities,” says Ilardo. “But I also think natural selection is a lot more powerful than we sometimes give it credit for, and maybe we should be looking for it in more places than we thought.”

More like this
Science
5.14.2022 12:30 PM
Omicron subvariants: An epidemiologist answers 5 essential questions
By Louis Jacobson and Kaiser Health News
Science
10 hours ago
Pig-human heart transplants still have a long way to go
By Andrew Fenton, The Conversation and Françoise Baylis
Mind and Body
5.3.2022 10:00 AM
Should you exercise when sick? It’s complicated
By John Hough and The Conversation
Related Tags
Share: