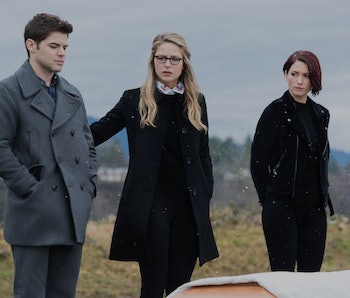 Traditional nuclear families are a rarity in the modern world, but it can still be difficult to put into words what it means to come from a broken one. An unexpectedly emotional episode of Supergirl, centered on Winn Schott and his history as the son of a supervillain, puts into words and pictures what millions of people struggle to say. Also, it has the biggest Batman Easter egg yet.

In “Schott Through the Heart,” the first post-hiatus Supergirl episode and the second Bon Jovi reference this year, Winn (Jeremy Jordan) learns his father, the Toymaster, was killed in prison. At the funeral, Winn is visited by his mother Mary (Laurie Metcalf), who abandoned Winn shortly after Winn’s father had officially turned into Toymaster. While Winn is initially justified in his chilly reception towards her, Winn quickly learns how much of a mother Mary actually was and how she was forced to sacrifice actually being there for him.

In order to get the action going, the episode introduces the Toymaster’s protege, a prison security guard with a knack for tinkering and seeks to carry out her master’s dying wish of… well, destroying the city, and stuff. Really, it’s unimportant, and Supergirl knows its real strength this week lies in Jeremy Jordan. Woefully overlooked as the most emotive actor in the cast, “Schott Through the Heart” lets Jordan shine, allowing him to show Winn as the good man he is not because of his terrible childhood, but in spite of it.

Anyway, there’s a Batman Easter egg if you know your comics history. In the new Toymaster’s lair, a giant, robotic tyrannosaurs rex is activated and ordered to kill until it’s destroyed by Mon-El (Chris Wood), who uses a fancy cape trick that gets the attention of Supergirl (Melissa Benoist). “Karamel” shippers will love “Schott Through the Heart,” as the episode makes it obvious these two are on their way to finding each other again, but let’s focus on the t-rex.

If you’ve seen the Batcave, you know one of Batman’s coolest trophies is a giant t-rex. The t-rex is a deactivated robot, originating to the silly-as-hell “Dinosaur Island” written by Bill Finger and Bob Kane (cough) in Batman #35 in 1946. In that comic, Batman and Robin found themselves in an amusement park against giant robotic dinosaurs as part of a “big game hunt.”

After defeating dinosaurs and mechanical cavemen, Batman takes home the robot t-rex as a victory trophy, because he’s rich, adding it to his collection of giant joker cards and oversized pennies. Years later, when Batman met the Teenage Mutant Ninja Turtles, it was the first thing Michaelangelo jumped on.

Sadly, Batman still doesn’t show up in Supergirl, but that’s fine. Between Winn’s story, and a subplot with J’onn J’onzz and his own father, M’yrnn J’onzz (Carl Lumbly), there’s enough family melodrama to go around. There’s no need for another brooding vigilante in a cape to take up space.

Supergirl airs Mondays at 8 p.m. Eastern on The CW.