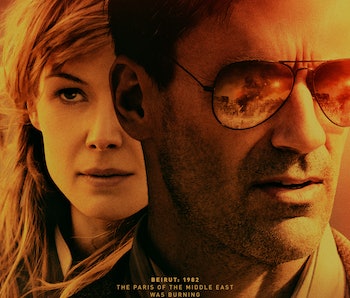 Few cities in the world have seen as much progress, and as much turmoil, as Beirut. Once it was among the cities nicknamed “Paris of the East,” but between 1975 and 1990, the Lebanese Civil War changed the fortune for a city that today has a population of around 2 million. Americans, if you’re wondering, are officially discouraged from visiting Lebanon by the State Department.

The film, Beirut, a thriller written by Tony Gilroy (Rogue One), directed by Brad Anderson (The Machinist), and starring actors Jon Hamm and Rosamund Pike, has come and gone from theaters (it earned $5 million domestically); it can now be viewed via small screens on transatlantic flights. But prior to its theatrical release in April, Beirut was at the center of a controversy for its tired depictions of the Middle East that may have had more to do with its marketing than the actual film — at least according to its writer and director.

In separate interviews, Anderson and Gilroy tell Inverse where the trailer went wrong and why they wanted to make a movie about Beirut in the first place. Both men also defended the film, explaining how and why Lebanon looks the way it does in Beirut.

Beirut follows a U.S. diplomat who negotiates the release of an American citizen from a Lebanese terrorist, one who happens to be the grown-up adopted child of Hamm’s character. Set in the middle of the Lebanese Civil War, Beirut is a star-studded drama whose setting physically represents its protagonist’s emotional turmoil.

But when the trailer was first released in January, it went viral for the wrong reasons. Between its bleak vision of a ruined Beirut washed in sepia, its largely white cast taking on “white savior” roles, and a generic Arabic soundtrack, the internet accused Beirut of trafficking in the same old Hollywood stereotypes.

There was even a Twitter campaign to boycott the film. In the end, it was a minor box office success grossing just $7 million worldwide — though that may have more to do with the subject matter than the controversy.

Anderson, the director, blames the trailer for not communicating its period setting of 1982, amidst the country’s tumultuous civil war.

“A lot of the early reaction was the trailer, and not seeing the fact it was a period piece,” he says. “They saw these pictures of a destroyed city, didn’t realize it wasn’t in the here and now.

“Beirut, back then, was a question of what future this place was gonna be. It was pretty grim.”

He adds that the film, which was shot Beirut in Morocco, 3,000 miles away from Lebanon, is not supposed to be totally accurate. “It’s set in a factual world but the story is fabricated,” he says. “I don’t pretend to be a Middle East expert, but in terms of how we depicted the visual optics of what the world was like, I don’t think we were off.”

Gilroy, who conceived of the idea for Beirut back in 1991, understands the criticism. “I’ve had a lot of discussions over the last couple weeks,” he says. “The trailer was built for the American audience. I’m not sure the trailer was sensitive for people living in Lebanon. I think there was some justification for going, ‘What the hell?’”

Gilroy adds that he understands if native Lebanese felt slighted by Beirut. “If you’re Lebanese, and this is your home, you really had this wonderful, complicated, diverse sanctuary in the Middle East, and you’ve seen it destroyed, sensitivities are high,” he says. “It’s a very sensitive society, some of it understandable. I hope the ad campaign is not too incendiary, but the movie itself — I think my feelings about Lebanon and my politics are certainly the feelings of the hero. It’s about a guy who loves Beirut and has it taken away.”

In his own words, Gilroy describes Lebanon as a country “half the size of New Jersey” that “happens to be at the center of history.”

“It’s been pummeled for thousands of years by the outside,” he says. “It’s a proxy battleground for so many in the ‘70s. Beirut was the intellectual and cosmopolitan soul of the Middle East. It was destroyed by so many outside forces, by the United States, by Russia, by Israel down the road.

“The idea of paradise lost, of a place that had represented youth and the future, and having that destroyed and finding redemption, that was a really potent setting.”

This weekend, the movie opens in theaters in the UK. Its title, though, has been changed. Perhaps marketers learned their lesson here first. In London, audiences will see The Negotiator this Friday.

More like this
Culture
8.10.2022 11:30 AM
10 years ago, Jeremy Renner ruined the best spy-thriller franchise of the century
By Adrian Manuel
Science
8.13.2022 10:30 AM
The best superhero movie on HBO Max resurrects an ancient warrior myth
By Tara Yarlagadda
Science
8.18.2022 10:45 AM
Ancient chicken bones and snail shells date the destruction of a Greek city
By Jennifer Walter
Related Tags
Share: