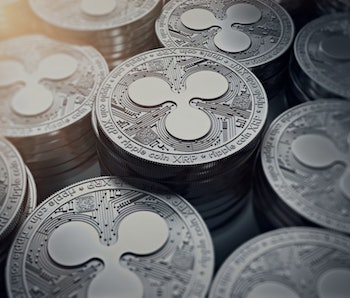 Ripple is booming. The third-largest cryptocurrency, with a market cap of $25 billion, rose 17 percent in value over the past 24 hours on Friday. The surge comes amid a wider boost in the crypto markets, but the rise of the XRP token employed by Ripple is the largest gain out of the top five biggest cryptocurrencies.

The cryptocurrency received a big boost on Thursday when Santander launched its One Pay FX platform. The system, developed by Ripple’s creator, is the first used by a bank to enable cross-border payment services. Although Santander’s system doesn’t use XRP itself, the coin is riding high in the wake of the news, reaching a value of 64 cents per coin — that sounds far cheaper than Bitcoin’s $8,000 price, but it’s worth remembering there are 39 billion XRP tokens versus 17 million bitcoins, meaning individual tokens are worth a lower amount.

The shift comes amid a wider boost in the cryptocurrency market, which has jumped from a market cap of $249 billion last week to over $330 billion seven days later. It follows a three-month decline in prices from a January high of $824 billion, a drop described by Revolut’s mobile banking head Edward Cooper as “a natural cooling off period following an unprecedented bull run.” Just four of the 100 largest cryptocurrencies reported 24-hour losses on Friday.

Experts have given a number of reasons for the turnaround. A weaker stock market may have sent investors looking into cryptocurrency as an alternative store of wealth, while new-found confidence in the South Korean stock market may precede a boost in the region. Cryptocurrency is also proving popular with Nigerian customers on Paxful, with Ray Youssef describing Bitcoin in Africa as “absolutely massive.”

There may be good news on the way for XRP beyond technological uses — Moneygram announced plans in January to test the currency itself for transfers, followed by Western Union just one month later. These could predicate wider XRP use, leading to a price boost.

Cryptocurrency may pull back from the brink just yet.

More like this
Gaming
8.11.2022 1:30 PM
Overwatch 2 is ditching the game industry's worst feature
By Willa Rowe
Innovation
8.10.2022 9:00 AM
Scientists may have revealed the ancient secret behind China’s Bronze Age
By Sarah Wells
Innovation
21 hours ago
Indoor lights make us sick — this technology could fix that
By Miriam Fauzia
Related Tags
Share: