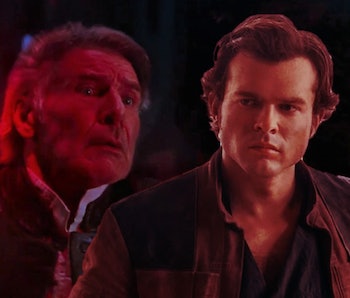 On Thursday, the official website for the Cannes Film Festival posted the runtime of Solo at 2 hours and 15 minutes. This runs contrary to the runtime listed on Google back in January that suggested the film was 2 hours and 23 minutes. It also means that Solo is the same length as The Force Awakens. It’s obviously an accident that the first and last Star Wars movies to feature Han Solo are the exact same length, but it’s still a little weird.

To put it in context, this makes Solo a full 17 minutes shorter than Star Wars: The Last Jedi, which clocked in at 2 hours and 32 minutes, which easily made it the longest Star Wars movie ever. For reference, here’s how the Solo runtime stacks up against all the previous films in the saga.

The Empire Strikes Back: 127 minutes (2 hours and 7 minutes)

As previously reported, Solo will hit Cannes on May 15, a full 10 days before it hits theaters everywhere on May 25.