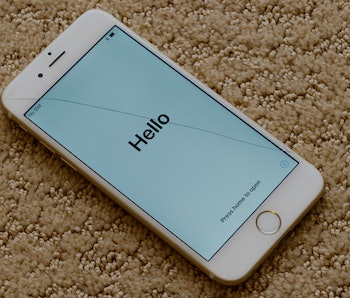 Apple’s most recent software updates are giving repair stores a headache. Users who visit a store unaffiliated with Apple to fit an official replacement screen may find the ambient light sensor stops working, a feature present since the first iPhone that adjust screen brightness based on your surroundings. It’s a strange flaw, but some suspect the company is cracking down on repairs.

The issue affects the iPhone 8, 8 Plus and X running iOS 11.1, 11.2 and 11.3 onwards. Apple repairs and those from authorized third-party repairs seem unaffected, but unauthorized screens cause the phone to disable the sensor during the boot process. One repairer told Engadget they have “been waiting for this for five years to be honest, since the 5S,” with the ambient light sensor lock acting “as a test-case to see how it works, to see if they can link hardware with logic boards so if they were repaired outside of the Apple network it loses functionality.”

Repairers have run into issues before. Apple started shipping Horizon machines to some of its 4,800 authorized third-party repair partners, designed to replace Touch ID and Face ID authentication systems without triggering the phone’s security, a scheme that locks out other stores. When the iPhone 5S launched with Touch ID, some phones complained about “Error 53” after third parties switched out the fingerprint scanner. While the company claims the security test was meant to take place at the factory, some repair stores saw this as Apple testing the water to take control of the repair process.

The company has taken a cold stance toward third-party changes, sometimes asking consumers to follow costlier options. YouTube video producer Scotty Allen showed his 600,000 subscribers last week how he completed “the upgrade Apple hates the most” during a visit to Shenzen, China: switching out the 16GB storage chip from his iPhone 6S and replacing with a 128GB chip. Apple does not support the procedure and does not provide an alternative way to upgrade the phone’s internal storage, instead asking consumers to pay far more at the time of phone purchase.

American consumers are covered by the Magnuson-Moss Warranty Act, meaning companies cannot restrict consumers from repairing their products unless they provide the service or parts for free. Apple released a software update to fix “Error 53,” and it’s possible the same could happen again here.

The alternative doesn’t bear thinking about: Apple charges up to $550 to repair the rear glass of an iPhone X.

More like this
Innovation
8.14.2022 10:00 PM
60 years ago, an iconoclast designer revealed a fix for our biggest tech problem
By Tim Gorichanaz and The Conversation
Innovation
8.1.2022 5:01 PM
The 10 best iPhone wallet cases
By Masha Vapnitchnaia
Innovation
11 hours ago
Scientists finally found an efficient way to recycle plastic foam — it could make them rich
By Joanna Thompson
Related Tags
Share: