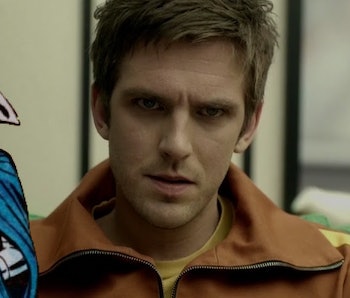 Fairly early in this week’s episode of Legion, team scientist Cary Loudermilk name-dropped one of the biggest and most important alien civilizations in Marvel Comics history: the Shi’ar.

On Tuesday night, Legion’s second episode continued the hunt for the Oliver Bird and the Shadow King, but while most of the team was out chasing down a dead end, Cary was left back at the base to investigate that weird metal orb that abducted David at the end of Season 1. He remarks on how “technologically advanced it is.” And even though he does say, “I can’t shake the feeling that somehow I constructed it,” he responds to something Kerry says in his head by saying, “No, it’s not Shi’ar.”

This offers low-key confirmation that this Marvel Comics universe is a lot bigger than it’s seemed so far, because not only is the world aware of mutants in Legion, but they’re also aware that alien life exists. Not only that, but what if I told you that David’s father once married a Shi’ar woman?

We’re a far cry from David become confirmed as half-alien or anything like that, but the Shi’ar being confirmed in the Legion universe is kind of a big deal. Empress Lilandra Neramani was a fearsome ruler that actually married Professor Charles Xavier in one particular storyline. Jessica Chastain is actually playing the Empress in the upcoming X-Men: The Dark Phoenix movie.

Other than the Skrull and Kree, the Shi’ar represent the largest and strongest alien empire in the Marvel Universe. They’re an avian-descended race of humanoids that have played a huge part in X-Men comics in the past, especially in Dark Phoenix storylines. They have incredibly advanced technology, and most of it is even sentient.

So it almost makes sense that Kerry might assume this technology came from the Shi’ar, even if Cary quickly dismisses that assumption.

So is this epic name-drop just a fun Easter egg left for X-Men fans, or could it mean something for Legion in the future? One thing’s for sure: We still don’t know who David’s biological mother is on Legion, so there’s no telling who it might be.