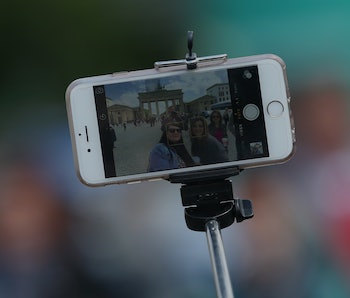 Earlier this year, British novelist Howard Jacobson drew dry chortling from the well-read masses with his description of the selfie stick as the “lightning rod of narcissism.” As evidenced by one burnt corpse in South Wales, Jacobson was spot on. Selfie sticks are, indeed, a very bad thing to be possessed of during a tempest.

The as-yet-unidentified lightning victim was reportedly hiking through the Brecon Beacons when a storm broke out. Witnesses at the scene believe the metal pole was responsible for attracting the bolt, which struck him dead.

Beyond a lot of prescient jokes about how selfie sticks double as lighting rods, reports of similar accidents are scarce online. Seems like it was bound to happen sooner or later. Maybe public parks should consider adding their names to the roll of places already banning the poles for safety reasons, along with Disney.