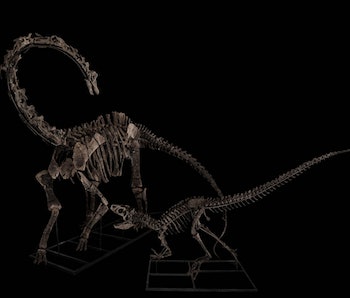 A Paris auction house is about to sell something a little older than its usual fare of antique art and rare books. The skeletons of two dinosaurs, an Allosaurus and a Diplodocus, will go up on the auction block at Binoche et Giquello on Wednesday. The auction house expects the skeletons to fetch a combined $1.4 million, most likely from private buyers instead of museums, which shy away from such steep prices. Dinosaur bones are not usually so expensive, suggesting that they’re not just archaeological artifacts anymore.

This omission might sound surprising, but it actually makes perfect sense. After all, the Society of Vertebrate Paleontology officially condemns the private sale of scientifically significant specimens, so it’s entirely possible that this particular Diplodocus is embarrassingly incomplete. As Inverse reported in 2016, the private fossil market experienced a boom in the Nineties after the release of Jurassic Park, which led to the Field Museum of Natural History shelling out over $8 million to keep Sue the T. rex accessible to scientists and the public.

Since then, museums have become extremely reluctant to purchase fossils for prices like Binoche et Giquello expect from Wednesday’s auction, and the rift between private collectors and scientists has grown. As dinosaurs have become more desirable to elite buyers, they’ve also become much less accessible to the public and the scientific community. Furthermore, researchers typically won’t study or write about private fossils because there’s no guarantee that their peers will have access to the specimen to replicate the research. By selling these fossils to private collectors to display in their lobbies or living rooms, Binoche et Giquello is effectively removing them from scientific study.

While selling the fossils isn’t great for the scientific community, not selling them isn’t great, either. The unimpressive results of some auctions in recent years suggest that the dinosaur fossil bubble may have burst, and when fossils fail to reach prices that sellers deemed suitable, they may end up locked in vaults, which means they won’t even end up on someone’s mantle, much less a museum hall.

So while it may seem really cool to have a dinosaur on display in your home — and to be fair, it totally does — the auction process is definitely not helping advance paleontology or the public understanding of science.

More like this
Science
6 hours ago
The greatest dinosaur sci-fi franchise ever reveals a problematic genetics debate
By Andrew Maynard and The Conversation
Science
6.21.2022 10:45 AM
Ancient stalagmites point to a massive drought that upturned 6th century Arabia
By Allison Parshall
Mind and Body
6.23.2022 1:15 PM
7 trippy optical illusions that reveal how your brain perceives reality
By Jennifer Walter
Related Tags
Share: