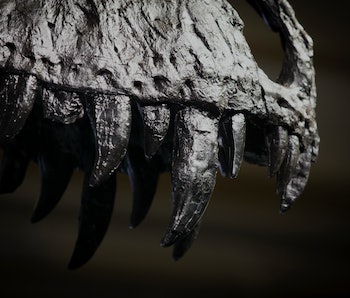 Late last month, a nearly complete mounted Stegosaurus skeleton was put up for auction in Germany. The piece was a showstopper, valued at $2.7 million and described as the most complete skeleton of its species ever assembled. And even then, there was more, because the fossils showed battle wounds proving the beast had used its tail to successfully defend itself against a predator. Not only was this a Stegosaurus, it was a battle-hardened one.

But no one bid.

This has become a familiar story: A stunning dinosaur skeleton arrives at auction after some media fanfare and then … nothing. In late 2013, a particularly interesting fossil was on the block. The artifact was a two-for-one, a pony-sized tyrannosaur and a ceratopsid that appeared to be locked in a deathmatch that both had lost. The so-called “Montana Dueling Dinosaurs” were valued at $7-9 million, and, according to one source, the commercial paleontologists behind the find had been shopping the fossil around to museums with a price tag double that. Bidding only reached $5.5 million, less than the owners were willing to accept. The fossil remains in a vault.

There appears to be a stalemate playing out in the fanciest corner of Jurassic Park between commercial bone sellers and collectors. Could it be that, like homeowners who bought before a crash, the owners of high-end specimens are simply in denial about deflated prices?

Let’s take this back a couple decades. In late 1997, Jurassic Park had yet to be usurped as the top grossing film of all time, and a Tyrannosaurus rex named Sue went up for auction. Sue was the largest and most complete T. rex ever found, and paleontology types were rightly terrified that a private buyer would scoop up the specimen and take her out of reach of scientific study. (Many leading paleontology journals will not publish articles about fossils in private collections, since there is no guaranteed access for other scientists to replicate or build on the research.) The bidding war that ensued blew past the expected selling price of about $1 million. In the end, the Field Museum of Natural History won the day, purchasing Sue for $8.4 million dollars with the help of donations from McDonald’s and Disney. At that exact moment, the new dinosaur gold rush began. Prospectors flooded the field of commercial paleontology, hoping for their own bonanza.

While Sue remains indefinitely in public and scientific trust, this was hardly a victory worth celebrating. Her sale had transformed dinosaur skeletons into a hugely valuable commodity, which meant the Field Museum’s good news was every other museums’ bad news. Suddenly, curators found themselves competing against investors unable to tell the difference between an Appalachiosaurus montgomeriensis and a Dryptosaurus aquilunguis.

Fossils and other natural history specimens had been bought and sold for as long as humans have collected them, but the market had always been governed as much by social norms as by supply and demand. Natural history museums avoided competing against each other for fossils, which, in the early 20th century, meant hiring teams of paleontologists internally and avoiding the purchase of specimens from commercial collectors altogether.

Today, the paleontology community remains ambivalent to capital. The Society of Vertebrate Paleontology officials condemn the sale of fossils of any scientific significance into private collections. Museums will purchase fossils commercially, but they do so with reluctance and under duress — because a failure to purchase might result in a loss to science. Putting some fossils up for auction starts to feel very much like ransoming them. Though museums prefer to pay for the work of finding and preparing the fossil, they are (or were) being asked to pay market value, which some are too stubborn to do.

And so, two dinosaurs that died locked in battle sit in a warehouse somewhere, their species still undescribed in the scientific literature, because no one can agree on a price. But wait — what happened to those private collectors that might have forced the hand of a museum, driving the bidding war? They seem to have gone the way of the dinosaurs.

There are normal, commercial reasons why the high-end private fossil market may have dried up. The world’s economy has slowed, oil prices have crashed, and it’s distinctly possible that everyone with the money and the inclination to purchase a tyrannosaur for their foyer already has.

There’s also this: a climate of increasing legal risk, ethical uncertainty, and public pressure. In 2013 the bidding on a Tarbosaurus bataar skeleton nearly hit a million dollars, but the transaction was never completed. The skeleton had been exported illegally from Mongolia, a judge later ruled, and the commercial fossil hunter behind the sale was sentenced to three months behind bars for the heist. And remember when a debt-ridden Nicolas Cage was forced to return a tyrannosaurus skull he bought for $276,000 at auction, because it had been previously removed illegally from Mongolia? It’s hard to imagine a scenario that would induce more buyer’s regret.

The rules that govern the fossil trade around the world are complicated, and it’s pretty hard for even the experts to tell the difference between legally and illegally acquired specimens on any sort of deadline, which means that buyers have to worry about getting bad news too late. That risk, accompanied by the increasing stigma associated with limiting the access of the scientific community to potentially important material, makes the whole thing a lot less fun. And if owning a Tyrannosaur should be anything, it’s certainly fun.

These days, auction house representatives will say that they prefer to find a museum willing to buy a particular fossil, but that private bids will be considered. You can see what they’re trying to do here: Stimulate a private market to set a price, and then demand that museums pony up. But if recent events are an indication, the tactic won’t work. Private collectors have been scared away, and museums have refused to compete in a losing game.

Eventually, commercial paleontologists will have to come down to a price that the market will bear. It might not be a “free” market, but the market for dinosaurs has never been free — it has and always will be imbued with values and ideas about our relationship to science, natural resources, and the history of the planet.

More like this
Science
Jan. 19, 2023
Dinosaur fossils complicate our understanding of how they reproduced
By Elana Spivack
Culture
Jan. 20, 2023
Why The Lost World is better than all the other Jurassic Park sequels combined
By Ryan Britt
Science
10 hours ago
Exclusive: NASA Explains How the Voyager Missions Could Live Until 2035
By Kiona Smith
LEARN SOMETHING NEW EVERY DAY.
Related Tags
Share: