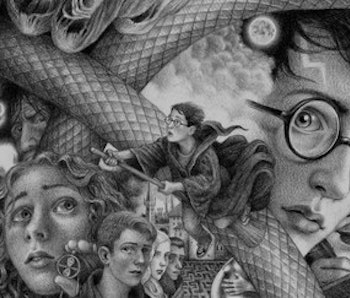 The very first Harry Potter book was released 20 years ago today, so the original publisher Scholastic announced a re-release of the entire series featuring seven all-new covers. Ophidiophobics beware! There are so many snakes on these covers that Samuel L. Jackson would totally freak out. Despite the series having only a handful of snakes throughout, every single new cover has bits of snake on it, even the ones with zero serpents featured in the plot of the book.

Scholastic announced the new covers on Tuesday morning. Illustrated by Brian Selznick, the new covers actually represent one continuous image that fuses together various symbols and characters from across the series. Of course, Harry himself appears in almost every single one. But you know what does appear in every single cover? Bits of snake.

To be fair, Harry’s body in the Chamber of Secrets cover is reaching out and casting his Patronus spell in the Prisoner of Azkaban cover, where his hand does appear. But still, these covers have way more snake in them than they do Harry Potter. At least they’re also chock full of nostalgic references from every book in the series.

The new paperback editions featuring these covers will be released June 26 with a collectible box set designed by Selznick due out in September.

Selznick self-identifies as “a proud Hufflepuff,” which could explain his immense fear of snakes. In a statement, he said, “One of the most challenging and rewarding aspects of the process was drawing seven independent covers that would stand on their own, while making sure that they also lined up to create one single satisfying image.” In all seriousness, he accomplished just that in a series of covers that most fans of Harry Potter will enjoy.

But way too much snake.