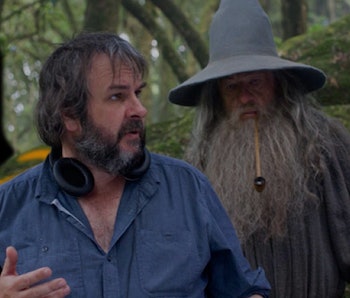 Amazon dropped a cool quarter-billion dollars on rights to a Lord of the Rings television series. It’s already a big price tag, and the company is going to have to knock the series out of the park if it wants to compete with the LotR and Hobbit movies, which are the definitive take on J.R.R. Tolkien’s classic fantasy world in many peoples’ minds. But, there’s a chance the series might not be so different, as the movies’ director, Peter Jackson, is reportedly in talks with Amazon, and could be involved in some fashion.

The Hollywood Reporter published a story about how, exactly, Amazon and the Tolkien estate’s $250 million deal went down, but one part of the article reveals that Jackson’s involvement is a real possibility. Jackson’s attorney Peter Nelson was not part of the initial rights negotiations, THR reports, but he’s since “helped start a dialogue between Jackson and Amazon.”

THR writes that Jackson would likely be an executive producer, should he be part of the series at all.

Amazon’s Lord of the Rings series won’t tell the same story as the movies, as it’s been described as a “prequel” of sorts. So, Jackson wouldn’t be retracing his steps exactly, but using his familiarity with Middle-earth to help make Amazon’s show feel alive. If he does, in fact, join the series, let’s hope it’s the Jackson who made Fellowship of the Ring, Two Towers, and Return of the King, and not The Hobbit trilogy, because those movies stunk.

There is no premiere date for the Lord of the Rings series, and likely there won’t be one for a while. If Game of Thrones is anything to go by, these giant fantasy shows take a while to make.