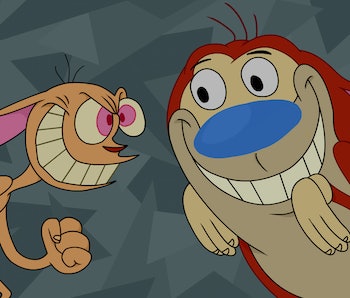 The creator of The Ren & Stimpy Show has been accused by two women of making sexual advances when they were underage. The two women said John Kricfalusi “preyed” upon them when they were young fans of the popular nineties TV show.

As detailed in a new report from BuzzFeed News, Robin Byrd was 13 when she sent Kricfalusi, known as John K, a video about her dreams of creating cartoons. This catalyzed a friendship between the two, which turned sexual three years later. In the same report, artist Kate Rice alleges she was 14 years old when the Hollywood cartoonist first began courting her through AOL messages.

Both young girls would go on to work for Kricfalusi in some capacity. When Kricfalusi flew a 16-year-old Byrd to Los Angeles and invited her to stay at his home, he allegedly touched her genitals through her pajamas. He offered her an internship at his studio, Spumco, and she started living with him as his girlfriend. In 2000, when Rice was 18, she was working at Kricfalusi’s home studio and alleges that he would walk around his living room “with his weiner hanging out of his pants” and that she found child pornography on his computer.

“The 1990s were a time of mental and emotional fragility for Mr. Kricfalusi, especially after losing Ren and Stimpy, his most prized creation. For a brief time, 25 years ago, he had a 16-year-old girlfriend,” Kricfalusi’s attorney said in a statement. Kricfalusi admitted to abuses of Byrd but blamed them on his struggles after losing the show. He continues to deny Rice’s claims.

Kricfalusi is the latest reckoning against a Hollywood predator and one that is causing Ren & Stimpy fans to grapple with the show. After the first season, Nickelodeon fired Kricfalusi and replaced him with his former partner Bob Camp, so fans at least have seasons of the cult cartoon unsullied by Kricfalusi’s influence. It remains uncertain whether the show will be pulled from syndication entirely.

Nickelodeon has declined to comment on Byrd and Rice’s allegations, which detail extensive abuse and subsequent trauma. However, it’s been reported that as of Friday morning, Krickfalusi’s portrait no longer hangs in the studio.