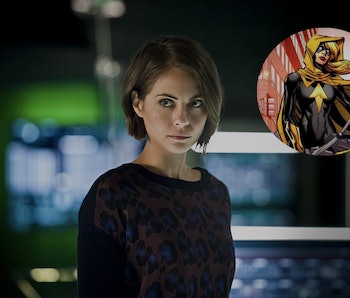 On Thursday, Arrow said goodbye to original character Thea Queen. After growing from troubled teenager to badass vigilante, Thea went out into the world to right her own father’s wrong in a true full circle moment for The CW series. Luckily Willa Holland’s exit doesn’t mean Thea’s story is over.

When discussing Holland’s long-planned exit with Entertainment Weekly Executive Producer Marc Guggenheim shared a potential future for Thea Queen away from Arrow. The character could live on outside of the TV series.

I think we know Willa’s just finished Arrow, she’s looking to see what other opportunities are out there for her. But I love this idea of Thea, Roy, and Nyssa making an unlikely trio, exploring a different part of the Arrow-verse, a different corner of the Arrow-verse. It would be a shame not to revisit it. At the same time, we’ve also shown that we can tell Arrow-verse stories in other mediums: animated, comic books, and prose novels. There are those avenues open to us as well. So I don’t know what the future holds, but there are potentials out there.

The option of an animated series is particularly interesting because The Arrowverse has had success with the media in the past. DC heroes Vixen and The Ray have animated series on CW Seed and Constantine, who has bounced between live-action and animated show, is joining Legends of Tomorrow as a series regular in a potential fourth season. An animated adventure centered on Thea would make a great addition to the line-up.

Thea’s exciting ends makes even more sense now. She could have driven off to a happy life with Roy, but instead is joining Nyssa al Ghul to destroy new Lazarus Pits. It’s a personal mission for Thea and one adventure viewers would definitely want to see.

While Holland’s potential return to Arrow is not off the table, it is nice to know for longtime viewers that the character they watched grow so much can live on in some form.