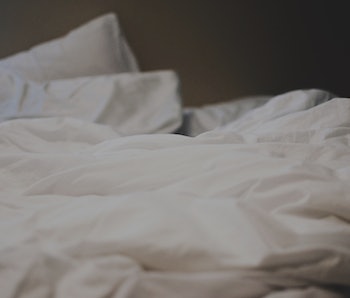 The London-born cookbook writer Hannah Glasse got her very own Google Doodle Wednesday commemorating her 310th birthday. While Glasse was perhaps best known for her popular title The Art of Cookery Made Plain and Easy, as well as for her famous Yorkshire Pudding recipe, she also dabbled in recipes for non-edibles — namely, an extremely suspect and potentially deadly poison for bed bugs.

As Vox pointed out in its Wednesday write-up of the 1747 book, Glasse advised her readers to exterminate pesky bed bugs with a mercury and egg white mixture that was then applied to the bed frame. “It is a certain cure,” Glasse wrote, per Vox, “and will not spoil anything.” The only problem is that, along with the bed bugs, it can also potentially kill people.

According to reports, the mercury thing was not altogether uncommon. Dr. Michael F. Potter, a professor at the University of Kentucky, wrote in a paper published by the Entomological Society of America in 2011 that bed bug solutions in the 1800s and early 1900s often included arsenic and mercury compounds.

“The poisons were mixed with water, alcohol, or spirits of turpentine and applied with a brush, feather, syringe, eyedropper, or oil can wherever the bugs were found,” he writes. “Mercury chloride (corrosive sublimate), popularly known as ‘Bed Bug Poison,’ was a common remedy used by both exterminators and the general public. One way to apply it was beaten together with the white of an egg and then laid with a feather. Unfortunately, a number of these products were also toxic to people, killing some accidentally, or perhaps by intent.” Perhaps by intent!

The Centers for Disease Control and Prevention notes that mercury poisoning can result in fever, fatigue, and clinical signs of pneumonitis in cases of acute toxicity — and that’s only the mild stuff. The United States Environmental Protection Agency classifies mercury as a neurotoxin for which high exposure can lead to kidney effects, respiratory failure, and even — you guessed it! — death.

The takeaway here: Glasse’s The Art of Cookery may have aged well for its recipes, but maybe think twice before giving its home remedy section any credence.

More like this
Science
Feb. 1, 2023
‘Golden Boy’ mummy CT scans reveal 2,300-year-old burial traditions
By Robin Bea
Culture
4 hours ago
The End of the Cold War Could Have Killed James Bond. Instead, it Made Him Stronger.
By David Grossman
Culture
6 hours ago
A Failed Sci-Fi Sequel Stunt Accidentally Set the Standard for the Forgettable Netflix Movie
By Hoai-Tran Bui
LEARN SOMETHING NEW EVERY DAY.
Share: