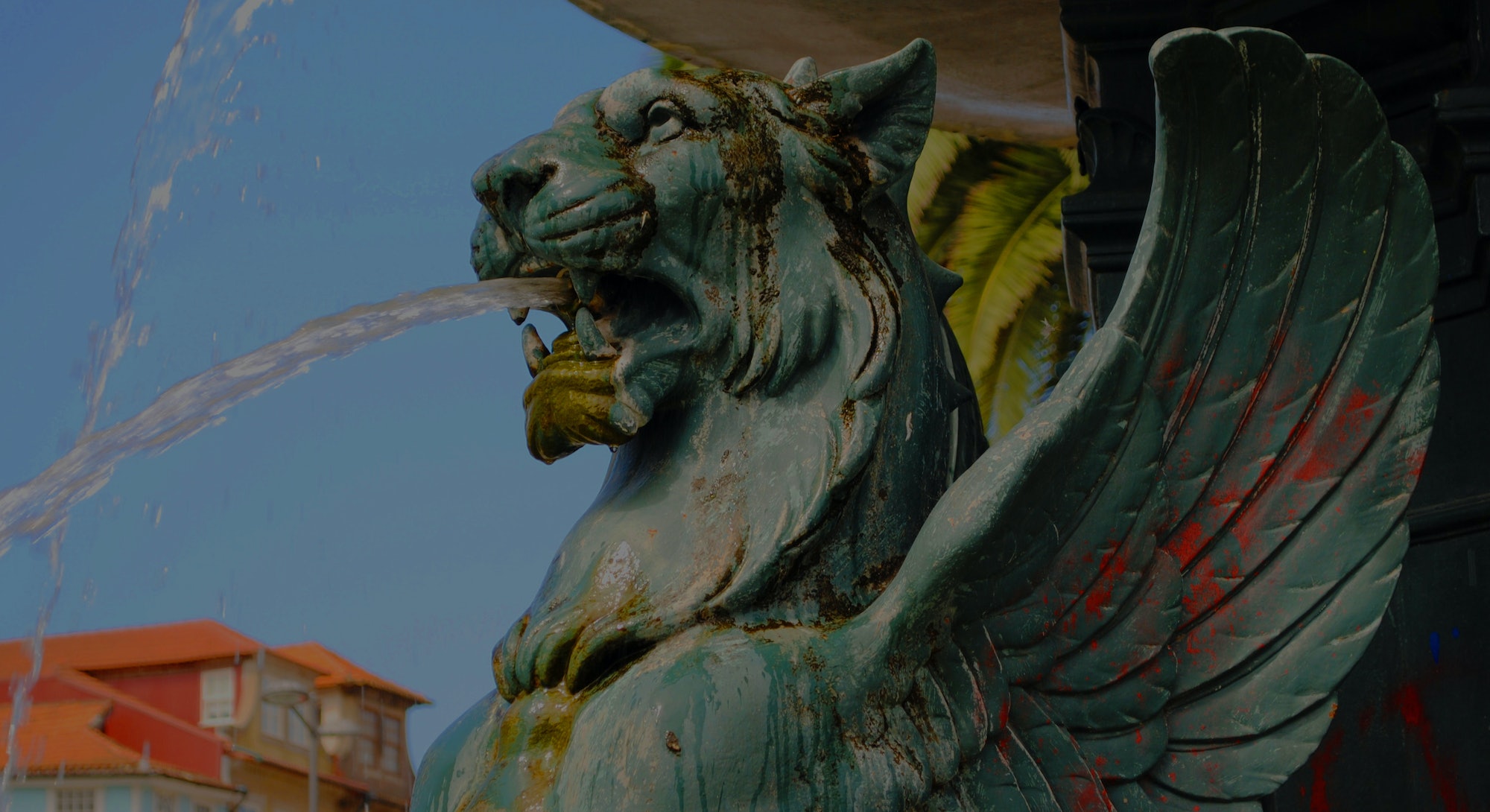 Potter fans know the story by heart: If it weren’t for a delayed train, J.K. Rowling may have never created Harry Potter. But that London King’s Cross train delay only tells part of the story of Rowling’s inspiration.

In 1991, Rowling moved to Porto, Portugal, also known as the “second city,” to teach English. In the two years she lived there, Rowling left a literary trail of enchantment behind. Now, after 23 years, seven books, a theme park, a spin-off film series, and a play, Portugal has become a haven for tourists who search for some of that Wizarding World magic.

Coimbra University is connected to Hogwarts

Dating back to the 13th century, in 1290, the educational institution is the oldest in Portugal, and one of the oldest in the world. Because of Coimbra University’s long-standing academic history, even their school uniforms have a unique backstory, one which Rowling took notice of. Strikingly similar to the Hogwarts uniforms, the students’ almost all-black uniforms consist of a leather case, a tie, white shirt, blazer, and skirt for the women, with pants and an interior jacket for the men, complete with a mantle — or as we’ve come to know them as, long black cloaks. They also have team colors, one color that represents their degree and another for their university.

According to Francisca Oliveira Martins, the creator of the “The Origin of Hogwarts” Harry Potter tour in Porto, Portugal is the only country in the world that has uniforms for their public schools, which is rooted in a desire for equal conditions among its citizens.

“Three hundred years ago, we didn’t have the same conditions for the entire population like we have today, so to go to a university was a thing that only the nobles were able to pay for,” Martins tells Inverse. “And, at some point, the housekeeping, the maids, with less possibilities to pay for service to the kids, they decide to arrange a way to make sure that their kids would be as well-educated as the rich ones.”

It was impossible for everyone to be on equal economic footing outside of the classroom, but Martins says it was a university professor who decided one uniform black outfit — he was careful to choose the darker hue because it concealed any trace of dirt — for all the students would make it possible for equality inside the classroom, and it’s continued to be that way ever since.

Shortly after the explosion of Harry Potter into the mainstream, the tourists coined the nickname “Harry Potters” for the university students after noticing the similarity in their uniforms. Most of the students, however, prefer to be separated from the comparison, as their academic traditions have long existed before Rowling’s series.

“It’s actually very funny to see the tourists on our academic week seeing the city filled with more than 50,000 students. They all look, and say, ‘Oh my god, this city is filled with Harry Potters, what’s going on?’” says Martins.

Allegedly, while taking up residence in Porto, Rowling would frequent the Café Majestic. She would scribble down notes on the cafe’s napkins, according to the Portugalist, where she is rumored to have completed the first three chapters of her first book, Harry Potter and the Philosopher’s Stone (later adapted in the U.S. as the Sorcerer’s Stone).

Opened in 1921, the belle époque-style of the restaurant was adopted from a period in Western history known for its frivolity and grandeur. The wealthy elite created a fairy tale existence through their refusal to acknowledge any of the harsher realities happening around them. Today, the restaurant still maintains the attractiveness of the Twenties with its Art Noveau-inspired curved wooden frames and mirrored walls. However, there’s no class distinction among the patrons despite what the splendor of the restaurant’s decor might suggest.

“The Majestic Café is a wonderful place, where musicians, thinkers and artists can get together to live the best moments life has to offer: simply sharing communication through words and gestures, glances, smiles and even a few tears sometimes,” Gloria Montenegro, the president of the Paris Academy of Coffeeology, was quoted saying about the restaurant on its website.

From the top of Porto’s bell tower, you can watch the entire city go by. It has more than 250 years of history and has been considered a national monument since 1910. The tower’s motifs are defined by the Baroque period and include an iron cross situated at the very top.

Bearing a resemblance to the Astronomy Tower as illustrated in Harry Potter, throughout the films, the tower is usually seen looming in the distance of the Hogwarts grounds. While it is generally out-of-bounds for the students, save for their classes, in the first book, Harry, Ron, and Hermione are caught by Filch when they send Hagrid’s pet dragon from the top of the tower to Charlie Weasley in Romania. And, during the pivotal moment in Harry Potter and the Half-Blood Prince when Snape kills Hogwarts’ beloved headmaster, Dumbledore, we see him slowly fall backward from the tower, signifying a victory for Voldemort’s Death Eaters.

Highlighting a darker time for Portugal, the Aljube activist museum opened up in 2015 in Lisbon in the building of a former jail for political prisoners under dictator António de Oliveira Salazar’s rule. The museum serves to remember the oppression the prisoners faced during his regime through various forms of torture and isolation cells. It also emphasizes the various stages of his dictatorship throughout the museum’s three floors of exhibitions by shedding a light on how Salazar came to power and was then overthrown.

Those familiar with the former Portuguese dictator quickly took notice of his name in relation to baddie Salazar Slytherin. In April 2017, Rowling took to Twitter to confirm the connection from an inquiring Potter fan.

Martins says that J.K. Rowling’s depiction of Salazar Slytherin’s character isn’t as complex in comparison to how Portugal feels about António Salazar as a ruler, a topic in which the country is still divided on: “He was not a typical dictator like Benito Mussolini or Hitler. He didn’t kill people to achieve his goals but, of course, he forbid people to talk about politics, to choose another ruler, so yes, he was a fascist, but he didn’t want money from the country. He doubled the fortune in gold that we had at the time … I think we need more time in Portugal to make a clear idea about Salazar, but the thing is, the most simplified idea that is passed in the schools to the kids is, yes, Salazar was a bad person. So I think J.K. Rowling just took that and applied that to Salazar Slytherin.”

Known to the locals of Porto as Lion’s Square, a magnificent fountain decorated with four seated lions is responsible for the square’s namesake. But the fact that the lions have wings indicated not only their tie to mythical folklore but perhaps the inspiration for the Gryffindor house’s mascot. The fountain also serves as a meeting place during the city’s academic week, further implying its relation to Gryffindor.

While there is no official connection to the fountain, Rowling has been known to use intricate details from iconic pieces of architecture as a vision for her Wizarding World, such as the hidden owl perched above the archway of the Woolworth Building in New York City.

Livraria Lello bookshop may have inspired the moving staircase

Considered by many as one of the most beautiful bookstores in the world, Livraria Lello looks like something straight out of Harry Potter’s pages with its old world Gothic Revival design. Intricately crafted wood ceilings, a stain glass roof, which, according to Martins, includes a Latin phrase that roughly translates to “happiness is in the labor,” and a curving red staircase create a captivating, almost enchanting atmosphere. So much so, that many believe the winding staircase, made of reinforced concrete, in the center of the shop inspired Rowling to develop the idea for Hogwarts’ moving staircase.

Manuel de Sousa, the communications manager for Livraria Lello, tells Inverse the Lello brothers, who created the bookshop in 1881, really wanted to “impress people and seduce them so they would buy books, as the Lello brothers believed that the development of Portugal largely depended on the instruction of its people.”

While Lello avoids putting too much emphasis on its connection to Harry Potter — it is known as the first bookstore to print relevant Portuguese writers like Eça de Queirós and Camilo Castelo Branco — the shop will still occasionally create events around the series, like a Hogwarts-style dinner.

J.K. Rowling lived in Portugal from 1990 to 1995, which were formative years for our bespectacled hero to start taking shape in the first book. We think of Potter as being steeped in British culture, but really, everything about the series is much more cosmopolitan. Rowling’s books aren’t strictly about England; they’re about the world, and her time in one of Portugal’s most magical cities comes across in the series. But, just like Hogwarts’ moving portraits or the Room of Requirement, you just have to know where to look.