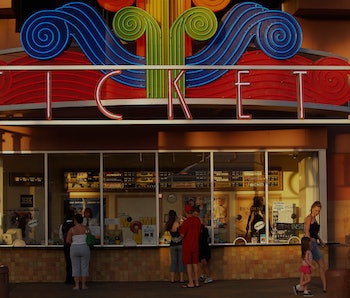 Raiders of the Lost Ark is the latest in a long line of movies headed to the Royal Albert Hall in London. The prestigious event space is one of many around the world catering to a specific variety of film experience. For cinephiles with an appreciation of movie scores you can now attend a screening of your favorite flick while a full orchestra performs the score. Live.

It sends shivers down my spine to just imagine being in the same room as the musicians belting out James Horner’s Aliens score. And shivers is where it will end for a large portion of movie lovers. The price of admission to these types of events is on the rise.

For example, to celebrate the 30-year anniversary of Back To The Future, composer Alan Silvestri’s glorious compositions will accompany two screenings of the film on July 4 - also at the Royal Albert Hall. Those prices range from £28-£68 (that’s $43-$106 US). The two showings of Raiders in March 2016 have tickets priced between £28 and £74 ($43-$115). Alright, so it’s not a trip to the moon. It’s not cheap, either. Especially when a trip to the cinema for a regular movie is steadily becoming more costly.

In my mind, there’s a category of clientele to whom this high-brow theatrical movie extravaganza is directed at. (They’re all wearing the masks from Eyes Wide Shut in my mind too.) In reality, there’s a legion of dedicated fans who are coughing up to experience their favorite childhood movies again and again in new environments. The Back to the Future Secret Cinema event in London had 75,000 people in attendance over its 30 night run! (Which is why it’s on its way to Los Angeles.) Similarly the recent Hollywood Bowl screening broke the record for the largest-ever screening of the film with approx. 16,000 fans in the crowd.

Is it that these events are becoming an unofficial form of remake or reboot, or perhaps an alternate way to experience a fond cultural document? The first-time feeling (no, not that) when your senses are knocked flat by an incredible movie, record or novel is something you hear people refer to over and over again. “You’ve never seen-heard-read X? Ah, you’re so lucky!” There’s a lot of movie fans who will pay to restore that feeling of luck. As for me, I’ll just be cranking this out through the DIY surround sound in my apartment.

More like this
Entertainment
Jan. 23, 2023
Animalia is an alien invasion movie with metaphysical dreams
By Andy Crump
Entertainment
Jan. 25, 2023
Polite Society breaks the mold for the coming-of-age movie
By Andy Crump
Culture
Jan. 27, 2023
The Master was called a movie about Scientology, but it’s about so much more
By Dais Johnston
LEARN SOMETHING NEW EVERY DAY.
Related Tags
Share: