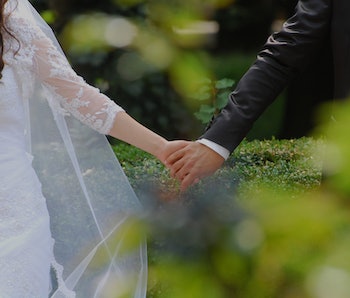 Sane people have brought us to the point, in modern nuptials, in which we don’t automatically assume a bride will be taking her husband’s surname. This is progress — the tradition meant about zero work for the guy, a lifetime of soft hassles for the woman, and a forfeiture of identity that went one direction only.

What’s good for the goose should be good for the gander. You know you can - in the name of equality - hyphenate your names or share a portmanteau-style mashup surname. But, dudes, you too can take your bride’s surname. In fact, it might make more sense than the alternatives. Some men, as Jacob Desjarlais explained in a piece he wrote for Time, drop their last names altogether in favor of their wife’s surname.

Desjarlais is one. Born Jacob Smith, he became a Desjarlais to connect to his wife’s wide-reaching French family, who welcomed him into the clan warmly. “The more I thought about it, the more I realized that names are something you can decide to keep or take for yourself,” he wrote in his piece. “People choose nicknames — like Bob or Becky instead of Robert or Rebecca — or new last names because that is something they want to aspire to be. It’s a promise they make to themselves.” Plus, he wrote, he simply preferred the sound of the name and its distinctiveness in a world full of Smiths.

Other than tradition — one inherited from a patriarchal system — is there a logic to adopting only male names at marriage? “Because we’ve always done it” isn’t a good enough answer in the 21st century, and unless you’re heir to some ridiculously lucrative oil fortune or real estate empire, a simple name change can contain a modest identity choice. Once you entertain the possibility, you might realize the decision is exactly that, and not an obligation you must default to.

Time’s Facebook page (admittedly isn’t the best place for cogent arguments about breaking societal norms) has attracted comments that run the gamut on Desjarlais’s piece. He’s also been getting a lot of flak for it on Twitter. For every person who supports the choice to do whatever the hell you want — since this is America after all — others are moved to resort to bully stances to uphold the status quo. “A woman should always take the man’s last name…..just my opinion,” one detractor says.

The level of rationale in the dissents doesn’t rise much higher. Name-calling is about the best folks can offer in rebuttal — appropriate, really, as the whole issue is about what’s in a name. A modern couple ought to entertain this thought: A question people long assumed was settled may in fact contain surprising possibility.

More like this
Mind and Body
19 hours ago
How to spot a liar using a classic mathematical trick
By Dorje C Brody and The Conversation
Mind and Body
6.29.2022 6:30 PM
How music makes you feel may depend less on your brain than scientists once thought — study
By Allison Parshall
Mind and Body
6.23.2022 1:15 PM
7 trippy optical illusions that reveal how your brain perceives reality
By Jennifer Walter
Related Tags
Share: