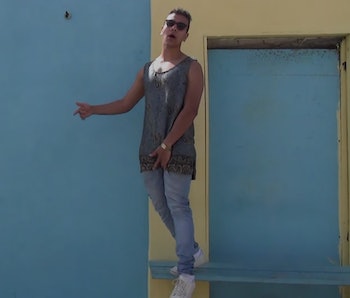 Ramriddlz is a Canadian rapper/singer who has recently been attracting a ton of coverage in the sort of hip outlets that specialize in forecasting the next big thing. Today, we’re sizing up Ramriddlz. Here goes!

CG: Ever since the rumor that Ramriddlz would soon be the next recipient of a put-on by Drake, the Canadian rapper became the next Artist We Seem Obligated To Care About. Thanks to Ramriddlz new P2P EP and his Internet hit “Sweeterman,” we have some feelings about this. David, how would you characterize Ramriddlz based off of this? What’s his deal?

DT: I’d characterize him as a swagless bottle of zzzquil. Not to be too harsh, but his “deal” apparently is “Drake cares about him, thus we all need to care about this bro.” The Drake stan in doesn’t want to blame him for the fact Ramriddlz could very well be a “thing”, because it’s simple trend hopping that’s hyping him, which is our Lord and Drake’s fault. But wow is there nothing in Ramriddlz poor singing, half-baked production or tremendously bad lyrics to imply that this is worth getting excited about. Corban, is there anything I’m missing from this EP?

CG: I don’t think so? What I’m hearing is like, a Canadian version of Young Lean with more of a touristic dancehall focus. I feel… weird listening to this. Sweeterman is sort of nonstop dropping lines like “Lebanese pussy pink like Skittles,” and “pussy straight from Beijing” — there’s a lot of offputting stuff about pussies and what colors they are. (And there’s that album cover). Most of the EP is kind of undercooked and same-y, so maybe we should talk about “Sweeterman.” How do you think it got to this point? Is Drake just our shepherd at this point?**

DT: Drake is our Shepherd, though I’m not sure he wants to be. Maybe this is all a test at this point and it’s a game to see who’ll blink first. Us (the media, fans) or him by putting a remix to this kid’s awful music and thus giving Ramriddlz 12 months of instant fame. “Sweeterman” is clearly the best song on this tape, but also he had the lack of taste to include a remix of the song called “Sweeterman (Dick-a-Ting Remix)”. I’ll ride for “White Iverson” as a weird post-all-good-things-on-the-internet-weirdo rap song, but this. Nah. This might be extreme, but if people are making sub-Young Lean music and getting co-signs. Is this the end? For music? For humanity?

CG: I will not be joining you on the White Iverson ride. Please do not use the carpool lane.

Eventually the music industry is just going to print the Drake Date; when the artist entered the realm of Drake, on the label. The Canada factor is big here I think: This is kind of why Drake rides for P. Reign, who is a Toronto legend who didn’t make a dent elsewhere. Regardless, Canadian teens: they’re running our future.