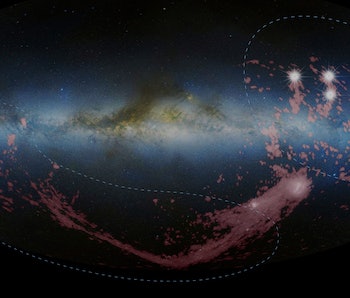 NASA’s Hubble Space Telescope has become the referee of an intergalactic wrestling match between two dwarf galaxies orbiting the Milky Way. The Large and Small Magellanic Clouds have been pulling at each other with their gravitational forces for billions of years. Scientists have been unable to tell which of the two galaxies is winning, until now.

In the process of the cosmic beef, one of the dueling galaxies has had a massive amount of gas pulled from it. This created a huge gaseous cloud, known as the Leading Arm, which has begun to fuel star growth in the Milky Way.

For years scientists have been locked in a debate about which of the two contenders is responsible for the Leading arm, but astronomers have finally figured out who’s losing this galactic showdown thanks to NASA’s Hubble Space Telescope.

In a paper published in the Astrophysical Journal a team of astronomers have used Hubble’s ultraviolet vision to determine that the Small Magellanic Cloud is getting a beat down.

This type of analysis was only made possible because of Hubble. Earth’s atmosphere filters ultraviolet light, preventing scientists from accurately measuring them. Hubble was able to gather UV rays straight from the source, which allowed Fox and his colleagues to conduct their study.

Their research was able to match the chemical “fingerprints” of the Leading Arm to the Small Magellanic Cloud. This means that the smaller of the two dwarf galaxies is not only losing, but will be responsible for the creation of a new generation of stars in the Milky Way.

In a distant corner of the our galaxy, there might be a whole new solar system forming thanks to the Leading Arm. You fought well Small Magellanic Cloud, you won’t be forgotten.