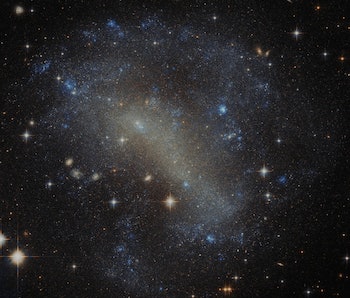 When you think of galaxies, images of dazzlingly colorful spirals or densely clustered multicolored stars might come to mind. But when you look at IC 4710, the star system seen here, it doesn’t quite seem to fit the classic definition of galaxy textbooks have ingrained in us. That’s because it’s essentially the ugly duckling of galaxies.

IC 4710 was first discovered in 1900 and has been captured by the Hubble Space Telescope so astronomers can further analyze its irregularities. This stellar neighborhood is in what is known as a “dwarf irregular galaxy,” and is 25 million light-years away in the Pavo constellation. These systems are far more scattered, chaotic, and lack the central bulge and spiral arms of more organized galaxies.

But unlike the ugly duckling, IC 4710 wasn’t born this way. This region in space may very well have looked like our Milky Way galaxy at one point, but astronomers believe it was greatly shaken up by a close encounter with another star system.

During these types of cosmic tussles, stars and planets rarely crash into each other. Instead, the extremely powerful gravitational forces that are emitted by these celestial networks push, pull, and completely morph the two parties involved.

IC 4710’s bizarre inner cloud of white stars and bright blue edge of newborn stars could have been the result of getting the worse of a galactic collision with a much larger system.

Besides from being an example of what happens when galaxies collide, scientists also believe that dwarf irregulars are very similar to the first galaxies formed in the universe. This provides further information to our understanding of how the universe has evolved throughout billions of years.