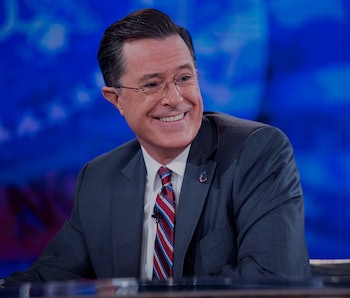 Stephen Colbert has been wielding his wit everywhere, reminding us of what we’ve been missing in the long months since The Colbert Report ended. We’ve seem his Colbeard and his spot-on Donald Trump annihilation. Now, we see him … taking over a public access show in Michigan, interviewing Eminem. Hitting the big time, in other words.

He seems to be following in the vein of the most Random Celebrity TV appearances, which include Will Ferrell selling beer in random Midwestern markets and Tormund from Game of Thrones selling … you know what, I don’t even know what he’s trying to sell us. The WTF-ness of it all is just too distracting.

Unlike Will Ferrell, and Tormund (who yes, I’m aware has a real name and isn’t his character, but just look at him, he’s Tormund Giantsbane) Colbert isn’t pitching anything. He’s just trying to get two nurses day-drunk and get to know the citizens of Monroe, Michigan. He also interviewed Eminem for the same amount of time he previously reserved for presidents. Just ‘cause.

Colbert’s interview style here recalls Between Two Ferns, as he discusses the local geography with Eminem, educates him about the rivers, and asks questions like “are you a fast rapper or slow rapper?” When Eminem, who he refers to as “Marshall,” discusses transforming into an animal, he asks, completely straight, “does that ever happen to you?”

They also talk meditation, of which Eminem is apparently a connoisseur. Colbert asks if he does it a lot, and Marshall says, “I’m meditating right now. Because this is really fucking weird.”

Colbert’s Late Show will premiere on September 8. Gnaw again on this Trump takedown till he takes over the local cable in your township or parish.