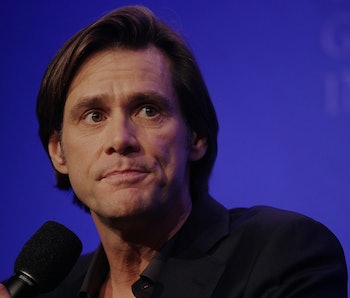 Sentient inflatable parking lot tube man and actor Jim Carrey flailed his limbs at the keyboard Tuesday for however long it took to get a series of tweets coherently blasting California’s new vaccination law. It was a depressing intellectual meltdown even by the standards of a Dumb and Dumber To alum.

The landmark legislation makes California the third state to require that children attending public schools get vaccinations. Its backers are happy Gov. Jerry Brown is putting a stop to preventable outbreaks of measles and whooping cough. Carrey’s response is to label Brown a corporate fascist. To wit:

Realizing his outburst was not going over with the public you’ll notice Carrey backpedals a bit on that past tweet, clarifying that it’s only thimerosal he has a problem with.

Fair enough, Ventura. Except even here, Carrey is relying on the debunked junk science typical of the broader anti-vaxxer movement.

Thimerosal is a mercury-containing preservative that was prevalent in a lot of childhood vaccines until 1999, when it was phased out of everything except influenza shots. It’s been the subject of a lot of anti-vaxxer doomsaying, with parents linking it to autism and developmental problems, saying it made their kid’s feet fall off, Christ knows what else. Even though there was no real evidence connecting it to any health issues, the U.S. Public Health Service and the American Academy of Pediatrics both recommended pulling it from the vaccines back during the Clinton years until further study could be done.

And, as Forbes reports in an extensive story on the history of the hysteria, further study was done. Lots of it. And still, absolutely no connection was found. The proof the preservative is harmless was actually so solid the American Academy of Pediatrics weighed back in, saying the ban should be reversed lest it cause “tremendous damage to current programs to protect all children from death and disability caused by vaccine-preventable diseases.”

I still have a soft spot for Carrey’s ‘90s films, so I hope we can all agree to chalk this up to just another guy holding a torch for his ex, hoping she’ll take notice. Celebrities! They’re just like us!

More like this
Science
Jan. 21, 2023
A deadly fungal plague swept the world of The Last of Us — is it realistic?
By Tara Yarlagadda
Science
Jan. 21, 2023
Plague study complicates a commonly held belief about the Black Death
By Samuel Cohn, Philip Slavin and The Conversation
Science
Feb. 1, 2023
Ancient Egyptian "Funeral Home" Reveals Secrets of Embalming
By Jennifer Walter
LEARN SOMETHING NEW EVERY DAY.
Related Tags
Share: