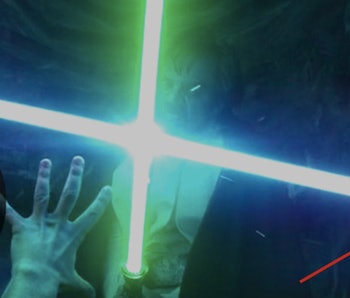 The true origin of Kylo Ren’s spitty crossguard lightsaber in The Force Awakens and The Last Jedi may have been hiding in plain sight. A new Star Wars fan theory posits that once Ben Solo changed his name to Kylo Ren, he modified his blue lightsaber, too.

On Sunday, writing for Screenrant, Alex Leadbeater presented an excellent theory based on visual cues from The Last Jedi. Basically, now that we can freeze-frame those flashback scenes where Luke and Ben Solo rumble after Ben gets woken up from a nap, it’s pretty obvious what happened. Ben’s blue saber hilt looks pretty much exactly like his red crossguard one before he modified it. To be fair, though Leadbeater’s eyes were very sharp here, we did have a similar theory right here on Inverse just a few days after the movie came out. Either way, now that we can see Ben’s blue saber up close, it’s clear that everyone is right. It’s pretty much the same saber.

Here’s Ben’s saber sitting by itself next to his calligraphy set in The Last Jedi.

And here’s Kylo Ren’s lightsaber in The Last Jedi.

Yeah, Kylo changed the color to black, and the top of the hilt is pretty different, but the basic shape is totally the same. Plus, this theory neatly explains why this lightsaber crackles and spits so much. Recent Star Wars canon establishes that the red-colored lightsaber blade is not something that occurs naturally, but instead, a blade will turn red when someone does evil things. In the 2017 canonical Marvel miniseries Darth Vader, readers learned how this happens. Here’s what Emperor Palpatine said in the first issue of that comic: “A red saber is no different than any other. Except, it has been made to bleed.”

So, it seems like when Kylo turned to the dark side, his saber became red, and he modified the top of it to control the unstable blade. The Force Awakens visual dictionary says that the crystal of Kylo’s lightsaber blade is cracked, which is why the blade is so unstable. This is not only a metaphor for the fact that he’s conflicted about being evil but a practical side effect of which this theory explains. The crystal is cracked because Kylo Ren isn’t sure about turning to the Dark Side. He’s still conflicted.

Which brings up another interesting possibility. If Kylo Ren’s saber went from blue to red, could it switch back again? If Ben Solo does return to the light in Episode IX, maybe we’ll see him swinging blue again.

The Last Jedi is out now for digital download and on Blu-ray and DVD on March 27.