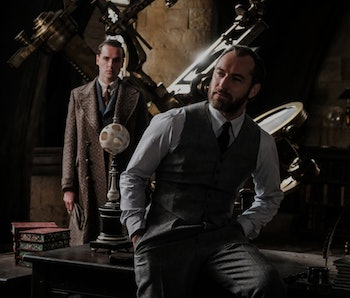 Potterheads around the world had a veritable meltdown Tuesday night over the first Fantastic Beasts: The Crimes of Grindelwald trailer, but it wasn’t because of Jude Law’s suave AF Young Dumbledore. Instead, they panicked over a pretty serious plot hole that emerged, one that could forever change what we know about the magical enchantments protecting Hogwarts.

After the first trailer for Fantastic Beasts: The Crimes of Grindelwald was released Tuesday, fans freaked out enough on Twitter to create a veritable Moment about this plot hole: You can’t Apparate in or out of Hogwarts grounds, but that’s exactly what a bunch of people do right at the beginning.

Several Minstry of Magic officials Apparate right onto a Hogwarts bridge, and it is pretty darn close to the center of the school’s grounds.

If these enchantments are in place, then how can this even be possible?

Hermione reminded us time and time again in the books that you can’t Apparate in Hogwarts because of the Anti-Apparition Charms she read about in Hogwarts: A History. These can seemingly only be disabled by the current Headmaster or Headmistress.

Before you chalk this one up to the timeline of the Fantastic Beasts movies, think again.

The Crimes of Grindelwald might take place almost 70 years before the Battle of Hogwarts in 1927, but those charms were definitely active already.

Author J. K. Rowling confirmed in a Pottermore article about the Hogwarts Express that these charms have been installed on the grounds since the school was founded in 990. Yes, we’re talking about charms that are 1,000 years old.

So aside from the movies writing its own continuity, how can this phenomenon be explained?

That’s the Closest You Can Get via Apparition

Think about it: If these charms were inactive, then why wouldn’t all these people just Apparate directly into the Great Hall or right into Dumbledore’s classroom? Maybe popping up in people’s faces like that is far too impolite for magical British people.

But if that’s the case, then why would they Apparate onto the middle of the bridge and walk all that distance on a misty morning at Hogwarts? Considering the long coats, it looks like it’s probably kind of cold out.

The only logical explanation here is that they all Apparate precisely as close as they can possibly get.

Ministry Officials Have Some Way to Bypass the Enchantment

One popular theory about this assumes that Ministry Officials and/or high-ranking people in the magical hierarchy can simply bypass the enchantment.

Remember that in Order of the Phoenix, the Minister of Magic Cornelius Fudge confronts Dumbledore at Hogwarts with several other Ministry officials. We don’t actually see how they all got into the castle, but it’s entirely possible that they were able to Apparate right onto the grounds. There’s presumably no real precedent that would prove otherwise.

The Current Headmaster of the Time Had It Disabled

The simplest and most practical explanation for this seeming plot hole is an obvious one: The Charm was disabled at that point in time.

It’s implied in the books that the Headmaster alone might be exempt from the Anti-Apparition Charm, but that he or she is the only person who can disable it. Harry and his classmates learn to Apparate in the Great Hall during The Half-Blood Prince when the charm is disabled.

(In case you’re wondering, the Hogwarts Headmaster in 1927 was Armando Dippet.)

Maybe the Ministry goons pop up exactly when Dumbledore himself is teaching a bunch of Sixth Years how to Apparate?

More like this
Entertainment
4 hours ago
New House of the Dragon “making-of” book plunges into the fantasy hit’s creation
By Jeff Spry
Culture
Jan. 25, 2023
30 years later, Star Trek is about to pay off a massive villain comeback
By Ryan Britt
Culture
Jan. 20, 2023
Why The Lost World is better than all the other Jurassic Park sequels combined
By Ryan Britt
LEARN SOMETHING NEW EVERY DAY.
Share: