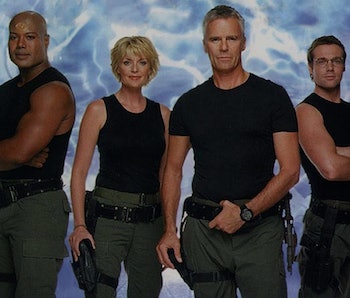 Proving some sci-fi fans get more excited about the potential of something, rather than the actual thing, a fan push on Twitter carrying the hashtag #StargateRising seems to be more popular than the just-concluded Stargate miniseries, Stargate Origins. To be clear #StargateRising is not a new Stargate series. Here’s what’s going on.

On Friday, Joseph Mallozzi — former writer and producer of Stargate SG-1, Stargate Atlantis, and Stargate Universe — took to Reddit with the battle cry that “Tonight’s the Night Stargate Fans Storm Twitter!” Seemingly, this was organized because Thursday was the final installment of the mini-series Stargate: Origins. That series was only comprised of 10 episodes each 10 minutes in length and was only available on MGM’s Stargate Command streaming subscription service. The series ran from February 14- March 8, 2018.

But, because it was only a miniseries, Mallozzi, and a huge contingent fans are determined to convince MGM (who owns Stargate) that the franchise is viable for another series. Clearly, Mallozzi is trying to demonstrate, through Twitter that the demand is out there. But did it work?

According to Mallozzi on Reddit, the hashtag #StargateRising “…trended #1 in Canada, France, and the UK, #2 in the US, and #7 in Australia and Worldwide.” Even popular Star Trek: Voyager and Stargate Atlantis actor Robert Picardo got in on the action. Several former Stargate actors, like Amanda Tapping and Jewel Staite (also of FireFly fame) tweeted their support, too.

The Stargate TV franchise is huge and complicated. In addition to Stargate: SG-1 lasting for ten seasons, the series Stargate Atlantis and Stargate Universe were also insanely popular. But, like other long-running cult sci-fi hits (like Smallville) most of the popularity of Stargate existed before the geek renaissance really blew-up the internet around 2008 when blogs like io9 started writing about Battlestar Galactica fan theories for a mainstream audience. In other words, though it was awesome, Stargate seems to belong to another time.

Which is appropriate, considering the premise of the show has dalliances with the concept of panspermia, the idea that human life could have been seeded by aliens. Basically, a lot of contemporary sci-fi fandoms were created by Stargate, whether they know it or not.

At present, despite the fan support for #StargateRising, no official confirmation has come from MGM that future projects are in the works. In 2016, a reboot film series was announced, which would have dealt only with the canon of the 1994 film, not the various series. But that project has since been shelved indefinitely.