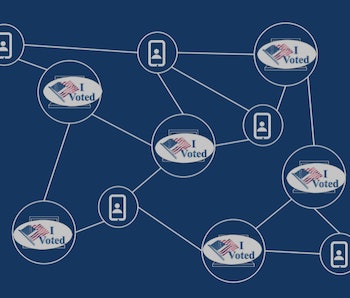 “I strongly believe that this election is the beginning of a much larger blockchain voting movement,” Agora CEO Leonardo Gammar told Coindesk on Thursday.

Gammar is not alone. Many believe blockchain technology could go a long way in creating a secure platform for digital elections, because it creates an unassailable ledger of transactions. The blockchain works by utilizing a distributed network of connected computers — all transactions are stored in a shared public record, so there is no main hub vulnerable to attack. In a blockchain election, each transaction represents one vote, and because a blockchain is tamper-proof, election results would perfectly reflect the vote without fear of hacking or fraud.

At least, that’s what blockchain proponents hope. The Sierra Leone election is an important milestone in testing these lofty ideals. Agora has shared their blockchain data with independent election overseers, and the company hopes that by creating a fully auditable database of election results it will assuage any skepticism about the election’s legitimacy.

The idea of using blockchain technology to ensure that digital elections remain secure isn’t a new one. Back in 2014, the Danish political party Liberal Alliance used the blockchain for inner party elections, so there is precedent for using the blockchain for secure voting. And in 2017, a group of American politicians established a Congressional Blockchain Caucus to advocate for a whole range of blockchain-related causes, including election security.

But detractors say it’s not really that simple. To implement blockchain technology in American elections, for example, would require lots of additional infrastructure. It’s the very nature of the blockchain that transactions are publicly viewable, so first we would have to figure out how to protect voter privacy while retaining the transparency that makes the blockchain so compelling.

Still, it seems like the idea is picking up steam. Agora is in talks with a number of other governments in both Europe and Africa to provide blockchain authentication to their elections.

If Agora’s efforts are successful, we may soon see governments fully commit to blockchain elections. In the future, don’t be surprised if blockchain runs the world.